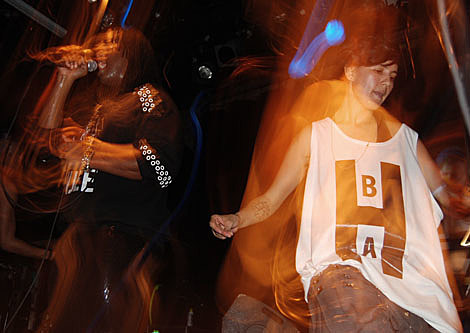 Hercules & Love Affair's Andy Butler was one of the many DJs at the Electric Zoo Festival that happened over Labor Day weekend. At the fest he was billed as himself, but on September 26th he'll be DJing as H&LA at MoMA MiXX, a new series of dance parties at the museum.

MoMA MiXX uniquely pairs together major artists with world-renowned musicians or DJs, with each featured performer spinning a set of music that night. The Agnes Gund Garden Lobby will be transformed into a dance floor, and MoMA's Donald B. and Catherine C. Marron Atrium will serve as a lounge area complete with bars. The money raised benefits the exhibition programming for The Museum of Modern Art and P.S.1 Contemporary Art Center.

Opening up the first night will be DJ sets by Justin Carter and Eamon Harkin (of the Mister Saturday Night series among other things). The paired artists are Mickalene Thomas and Derrick Adams. Tickets are on sale, though they're not cheap...

Tickets for each event are $75 per person (or $200 for the first three events), and include an open bar.

The next two events in the series are planned for January and April 2010.

Also on the way, the museum is hosting Between Worlds, an evening-length "pop spectacle" performance by Fischerspooner on November 1st. Tickets TBA. (MoMA is also still running Looking at Music: Side 2, and will be showing a Spike Jonze retrospective with No Age in October.) In the past, Hercules & Love Affair's lineup prominently featured singer Nomi Ruiz. More recently, she's been playing with Jessica 6. They opened for CocoRosie's return-to-NYC show at the beginning of September. Coming up, they're opening for Japanese psych rock band Yura Yura Teikoku at the Music Hall of Williamsburg on September 18th. Then the next night (Sept. 19th), they play as part of the New Languages Festival, which runs for six nights (starting Thursday, Sept. 17th) on two weekends at McCarren Hall in Brooklyn (on 98 Bayard St, an address that might sound familiar). Tickets are available at the door only.

For Japan's Yura Yura Teikoku, the MHOW is one of three upcoming US dates they have scheduled. The other two are opening for Yo La Tengo on Tuesday (9/15) and Wednesday in Vermont and Boston. Their new album "Hollow Me", which includes their recent EP "Beautiful", is out September 14, 2009 on DFA's Death From Abroad label (which helps explain the Jessica 6 connection). Album tracklist and NYC show flyer below.

The whole lineup for the jazz-based New Languages Festival, which "attempts to provide a panoramic view of 21st century jazz in New York City," is pretty diverse and spectacular. It includes Akoya Afrobeat, which matches the sound of Fela Kuti almost note for note (and integrates some of his songs into their rep), drummer Mike Pride's From Bacteria to Boys combo (who recorded a live session for WFMU in April), a set led by noted improviser and avant-jazz composer Tim Berne, and an opening night performance by Darcy James Argue's Secret Society, whose debut, Infernal Machines, came out in May on New Amsterdam Records.

The full schedule of shows and all tour dates are below... 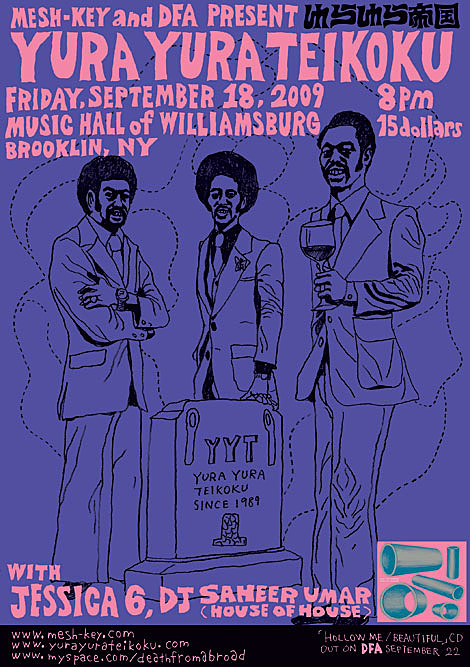