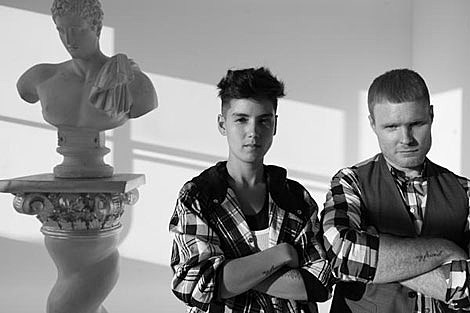 Andy Butler of Hercules & Love Affair made a DJ appearance at the July 3rd Firecracker party at the Hammerstein Ballroom. Resident Advisor didn't mention Butler's set, but doesn't seem to have enjoyed the vibe of the night...

At 7:00 AM, July 4th, young party people ambled out of Manhattan Center into pale light already wearing sunglasses. But it wasn't freedom that was ringing in their ears after a long night out. For ten hours, inside the 20,000 square foot ballroom, miscalibrated bass punched their cochleas. Billed as the event to "pop off" before fireworks over the Hudson, over a thousand had waited patiently for someone to light the fuse.

Despite sound and stage, it was up to the DJs to forget business and elevate the room. Unfortunately, they failed to truly engage the receptive audience or even distinguish themselves from one another. It was a visual spectacle, but ultimately a misdirected marathon with a corporate aftertaste, that never allowed Firecracker to go off.

Butler will be DJing again in NYC at the Electric Zoo Electronic Music Festival, taking place September 6th and 7th on Randall's Island.

Butler will also be in NYC (where he lives) for a weekend of Hercules & Love Affair shows on August 14th and 15th. They'll play the Gramercy Theatre on Friday, August 14th. Tickets go on sale July 17th at noon. Then, they're be coming to Brooklyn for an August 15th show at the Music Hall of Williamsburg. Tickets for that go on AmEx presale today (July 15th) at noon; general sale starts Friday at noon.

As a Hercules & Love Affair gig, it's not exactly clear who'll be on hand for the performance...

Village Voice: You know I have to ask about the state of Hercules and Love Affair. You guys cancelled your Coachella appearance, and everybody is slowly starting to form their own little subgroups (Jessica 6/Deep Red, Midnight Magic). What's going on?

Butler: [laughs] The situation is, for the next record, I'm involving a whole handful of new artists, and that's how it was going to be, always. There are a lot of artists I want to work with. Kim-Ann [Foxman], [vocalist] Nomi [Ruiz], all the kids that were working with me on the first record and the tours, they've started doing their own stuff. Nomi has her band, [bassist] Andrew [Raposo] and [keyboardist] Morgan [Wiley] have their own band...

VV: So it was more of a press misconception? Like, this solo project that happened to have a live touring band got cast more as a band when it wasn't?

Butler: Yeah. I mean, these are guest artists. Like, someone like Kim-Ann [Foxman] is potentially ever-present; she and I have a long friendship and a long-standing creative collaboration. The other artists like Antony and Nomi both have solo careers, and when they went into it, they knew they had solo careers and that they would be doing their own thing. So basically, the vocalists are Kim-Ann and a whole new batch of people that I've worked with at various points...I'm co-producing with a new producer. The whole scenery has changed.

Butler's DJ mix for the Sidetracked series is coming out July 21st on Renaissance Recordings. That record includes an exclusive new Hercules track. Butler's take on the track's new "angry" direction, with all tour dates, below...

Butler on the new Hercules track

VV: Tell me a bit about "I Can't Wait." This is an exclusive track you've included on this Sidetracked mix, and it's a lot more aggressive and defiant than anything on Hercules and Love Affair.

Butler: It's funny you should comment on that. In the process of writing new material, there's been a lot of different emotional content that wasn't there for the previous record. This year was a really blessed year for me, and I've had so much opportunity and so much fun, and I've had some things that were exciting, but I kinda tapped into anger a little bit during the writing process, which I kind of loved. I love when singers emote, and when you have a singer belting angrily, it can be as provocative as when they're sad and ripping their hearts out or even super joyful.