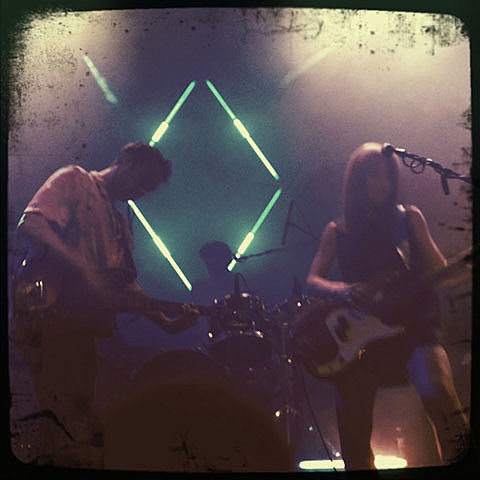 Record release shows are typically festive events, but the fanfare was rather minimal for Tuesday night's Here We Go Magic show at the Music Hall of Williamsburg - with the possible exception of Luke Temple's festive red Hawaiian shirt.

When the first opener of the evening, Miles Benjamin Anthony Robinson, unceremoniously walked on stage and started playing, the room was nearly empty, but since the show was piped down into the basement bar, people gradually began filtering upstairs as they realized that the show had begun. Despite the growing number of listeners, however, MBAR's energy level changed very little throughout his performance. His occasional stage banter (if you can call it that) seemed to be delivered, tight-lipped, through a smirk as if he didn't care whether he was intelligible or not.

Robinson often performs with a backing band, but for last night's performance (perhaps because he was a late addition to the bill), he was solo. With the exception of the final song, the majority of Robinson's set contained just a keyboard and pre-programmed beats. For his last song, Robinson juggled both the guitar and the keyboard, saying under his breath at the song's conclusion, "I guess I should have tuned my guitar before the song and not during it."

Hearing Robinson live is nothing like hearing his albums (his first was produced by Grizzly Bear's Chris Taylor, and his second, by TV on the Radio's Kyp Malone.) Take it or leave it (and some people will definitely leave it), Robinson is an intriguing musical enigma who already has something of a fabled past.

It's hard to tell if he takes himself too seriously or if he is overly cynical and sarcastically self-aware. He performed in one of the t-shirts he sold at the merch table, which says, in big black block letters, "MILES BENJAMIN ANTHONY ROBINSON IS DEAD," and he performed a cover of the Hall and Oates song "Rich Girl" midway through his set.

Next up was The War on Drugs, who put on an enjoyable enough set despite some minor feedback issues. With their rock and roll hair, jangly guitar riffs, soaring keyboard melodies, and fuzzed out lyrics, it's easy to get lost in the Philly three-piece's music. As with the first opener, the War on Drugs' vocals were largely indecipherable, but to be fair, that did not seem to be the focal point of their music. They jammed for a solid two minutes before singing at all at the top of their set.

review continued, with tour dates, below....

Then, as if taking a cue from the smoke machine, Here We Go Magic walked on stage just as a cloud of smoke filled the air, prompting one concert-goer to comment, "It totally looks like they were smoking a ton backstage." The timing was pretty comical and not too farfetched. After all, the band is on the line-up for Bonnaroo this weekend (all dates below), and with their psychedelic leanings, it isn't hard to see why they'd make for a solid stoner band.

Despite the modest turn-out at last night's show, the band didn't seem to let it get them down. Unlike the two openers, they actually seemed to be enjoying themselves and they even opened up to the audience a bit and expressed their joy at being back home in Williamsburg after a few months of heavy touring.

Throughout the evening, I kept thinking of a line from the band's new album, Pigeons. "It's casual, not heartbreaking. So casual, not mind shaking," sings Luke Temple in "Casual." These opening lines seem to succinctly and accurately assess the tone set by Here We Go Magic both on stage and in the studio. Their music seems effortless and a bit detached - and that's not necessarily a bad thing. Pigeons is a good album to accompany the lazy days of summer.

Though the material is still fairly new, all those months of touring seem to have made their performance tighter. Instead of staying in their own worlds on stage, the members seemed to communicate to each other with ease during their impromptu mid-song jam sessions. The addition of Brian Betancourt and Matt Clark of White Rabbits on percussion for a handful of songs was also a welcome surprise for the evening.

Of course, things picked up for crowd favorites like "Fangela" from last year's self-titled album and "Collector," the band's latest single, but on the whole the performance was rather spaced out and low-key. As the show progressed, more and more smoke poured onto the stage until nearly everything except a single decoration - a neon light in the shape of a diamond - was discernable. Following the conclusion of "Everything's Big," the last official song of their set, the crowd thinned out rather quickly, leaving only a modest crowd for the one-song encore.