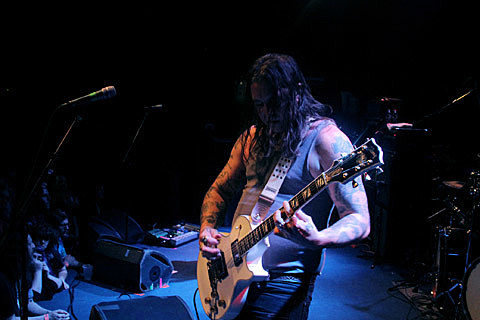 On Friday November 30th, BV's intrepid master of metal content BBG caught the High on Fire / Goatwhore / Primate / Lo-Pan show at Bowery Ballroom. On Saturday (12/1)December 1st, it was my turn to see this epic line-up, only on this night the show was happening at Music Hall of Williamsburg in your man Klaus' back yard. Was the show a total sausage-fest? Absolutely. Did each and every band thoroughly kick ass and take names? You bet your ass, motherfucker.

My primary reason I wanted to check out this show was the fact that Primate was on the bill, but boy am I glad I got to the show early and stayed late because from start to finish every metal itch I had was thoroughly scratched. The surprise of the evening has got to be how mightily and thoroughly the completely-unknown-to-me opener Lo-Pan absolutely crushed their 8pm sharp opening slot. Lo-Pan plays sludgy, stoner rock that is heavy as hell and manages to incorporate tasty riffs that remind me of old Sabbath with hints of slowed down Thin Lizzy and Kill Em All era Metallica. What sets Lo-Pan apart from most sludge metal you hear nowadays (besides the fact that Lo-Pan is effing awesome) is the fact that they have a singer who, god forbid, has abandoned the played-out 'craft' of screaming and grunting incoherently and actually sings. Like, melodically and articulately. Think Maynard James Keenan with a little more stank. As the first of four bands, Lo-Pan was playing to an unfortunately underpopulated audience. But after their set it was so obvious that everyone there thought they totally kicked ass, and I heard many people remark how glad they were they got to the show early and caught their set. Check em out!

After Lo-Pan, Primate, my primary reason for being at the show, took the stage. For those keeping score, Brutal Truth is one of my favorite bands of all time. BT frontman Kevin Sharp is the frontman for Primate and happens to be one of the greatest frontmen of all time. I'll basically buy into any project he's associated with. Primate plays loud, relentless grindcore at very high volumes which was a sonic departure from Lo-Pan and which finally got the crowd moving a little. As a barefooted Sharp prowls the stage screaming his balls off under the shadow of a ragged cowboy hat, his bandmates unleash hell. The thing I like about Primate, aside from the aforementioned speed and volume, is the fact that there is a touch of humor to their approach. Whereas Brutal Truth is super earnest grindcore, Primate comes across as a bit more playful. It's like how Murphy's Law is an antidote to the super earnest, straight-laced hardcore scene. Yes, Primate is grindcore, but there's something less rigid about them. They were awesome and vastly increased the energy level of the room.

With the energy level of the audience at a good pitch, blackened thrash metal greats Goatwhore took the stage, giving the audience a glimpse at yet another sub-genre of heavy metal. Makes sense. We already had our sludge and our grindcore. Going into this show I honestly had very little familiarity with Goatwhore but based on last night's performance I have to say they are effin great and I loved their set immensely. And, whoa boy, were they ever loud. I was up front for the entire show, but during Goatwhore's set there were moments where the double-bass drumming was so fast and furious that I thought it was going to loosen the contents of my bowels and create an unpleasant situation for everyone in my immediate vicinity. Jesus Christmas... for a four piece these guys make a lot of noise. And I have to give props to frontman Ben Falgoust; this guy absolutely owns the stage. From whipping his hair around in time with the music, to air guitaring furiously along with the guitar solos, to fist-bumping members of the audience, Ben succeeded in whipping MHOW into a frenzy. Some good ole fashioned pushing and shoving and beer spilling and people slipping and throwing up devil horns. It was awesome.

Six or seven beers, three bands, and one desperately needed bathroom break later, it was time for the highly anticipated set by stoner metal Gods High on Fire. At this point in the evening I, like mostly everyone else in the room, was hot, sweaty, hammered, a touch belligerent, and ready to rock my socks off. Matt Pike, who looks a little heavier than I remember (maybe a side-effect of rehab?), to me really is a living guitar god. No, he's not a shredder. No, he's not a brainiac genius inventing techniques and crazy gear. He just does what he does so well that he makes his MANY imitators look preposterous. He has a gift for creating the fattest, heaviest riffs of all time. And when you add bass player Jeff Matz (who was once in a band called Camarosmith which is basically the funniest band name ever) and pummeler Des Kensel into the mix, you get a slow burning wall of sound that is one relentless hook after another. Heavy. Heavy. Heavy. This was such a perfectly curated show that gave everyone a little taste of several different metal genres and I don't think my ears or my bowels will ever be the same.

Head below for the Bowery Ballroom setlist which, reportedly was identical to the MHoW show.