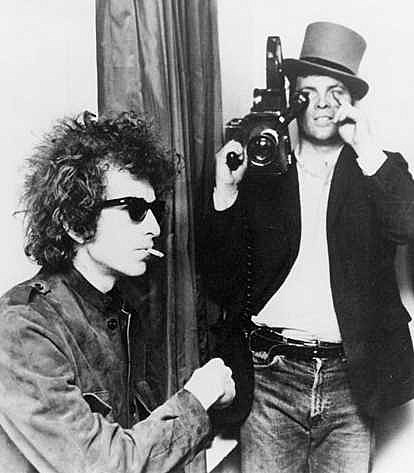 The National's High Violet came out Tuesday. They also used that occassion to release a video for the song "Bloodbuzz Ohio." That clip, which features Matt Berninger, his infamous glass of wine, and documentarian D.A. Pennebaker as a bartender, is posted below.

The band's High Violet Annex events kicked off last night with a low key few hours of DJing from members of Blonde Redhead and a ticket contest for Saturday's BAM show. Contests like that will be happening each day at the space which is next to Other Music. Tonight, Wednesday, there's also a full lineup of bands playing. Lineups for the rest of the nights still TBA.

Speaking of D.A. Pennebaker, he'll be directing a live webcast of the BAM show on YouTube Saturday night. And speaking of ticket contests for the show, we also have two pairs to give away courtesy of the show's sponsor, Zync. Contest details, with the above-mentioned video and a Pennebaker/Dylan (both pictured above) rehash to promote the show, below...

TO WIN A PAIR OF TICKETS TO BAM SATURDAY NIGHT: email BVCONTESTS@HOTMAIL.COM (subject: National) with your first and last name. Two winners will be picked at random and contacted.