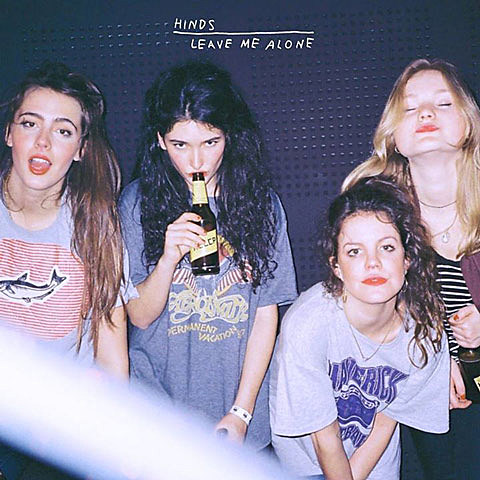 Spanish quartet Hinds announced today that their debut album, titled Leave Me Alone, will be out January 8 via Lucky Number / Mom + Pop. That's the cover art above and here's what the band have to say about the LP:

okay, (big sigh) believe it or not, this is the announcing of our debut album.
let's start from the beginning. garden is the first track of twelve songs. why?
do you know when musicians say they hate their songs? we don't know if that's true, we only know it's not in our case.. 'cause we fucking love this song. and we knew it will open the album since the very beginning. please don't say it was a shitty decision.

we've been one year writing this album only while we were home, and you guys know that didn't happen very often. but the good part of having to write songs so separately in time is that we wrote about very different feelings we've lived. these songs try to represent the 12 faces of love we've experienced.
it's funny 'cause we thought this album would be all party and cheerfulness but . SURPRISE. it's not!!!!! haha. feelings are more balanced, like in life. so suddenly we had a more sober -or even sad- album than we expected. please don't think we've turned into depressive people or something, we've always been humans, it's just we're now showing it to you.

You can check out the album's lackadaisical opening track, "Garden," below.

Hinds have added a string of North American dates opening for Glass Animals before they start their tour with Public Access TV which hits Brooklyn's Music Hall of Williamsburg on October 27 (tickets). Updated tour dates are listed below.