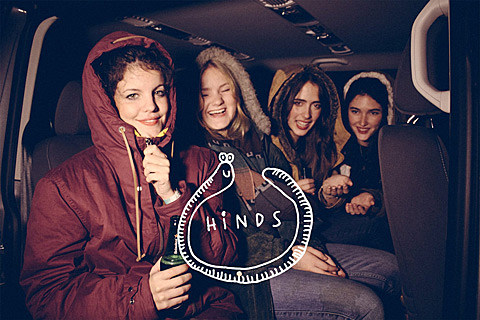 Hinds (formerly Deers) have a split 7" with fellow Spaniards The Parrots that will be out on Record Store Day via Burger. For their side, Hinds are tackling Thee Headcoatees' Farmer John-esque "Davey Crockett (Gabba-Hay!)" which they don't change too much, but bring their infectious energy to it. You can stream it, and their two singles, below.

Hinds make their North American live debut on Friday (3/13) at Brooklyn's Baby's All Right, the kickoff to their US tour. It's a late show (doors at 11 PM), The Yetis open and tickets are still available. After appearances at SXSW, Burgerama and places in-between, they'll wrap up their tour back in in NYC at Mercury Lounge on March 31 with Brainfreeze. Tickets are still available for that one too.

Updated dates are listed, along with song streams, below...