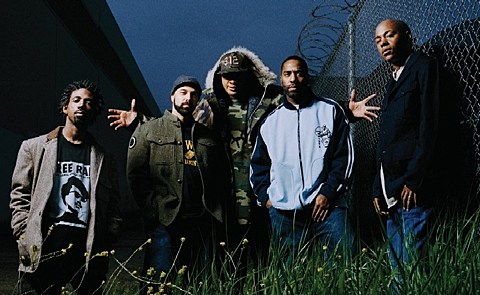 We briefly mentioned in our post of bands reuniting at Coachella 2013, LA hip hop collective Jurassic 5 are reuniting after breaking up in 2007 (one year after the release of their fourth album, Feedback). There's no insight yet as to whether or not this reunion will go beyond the Coachella slot but fingers crossed! They play on the Fridays (April 12 and 19).

Another big one on the lineup is Wu-Tang Clan, who play the Sundays of the festival (April 14 and 21). This one's not exactly a "reunion," like Jurassic 5 is, but it's worth noting that while Wu-Tang Clan members play shows a lot, it's not every day that they all join forces on stage.

Other rappers at the festival include Aesop Rock and Earl Sweatshirt on the Fridays, and El-P, Pusha T, Action Bronson, Danny Brown, 2 Chainz, and Theophilus London on the Saturdays. R&B singer Janelle Monae also plays on the Saturdays.

A classic Jurassic 5 video below...