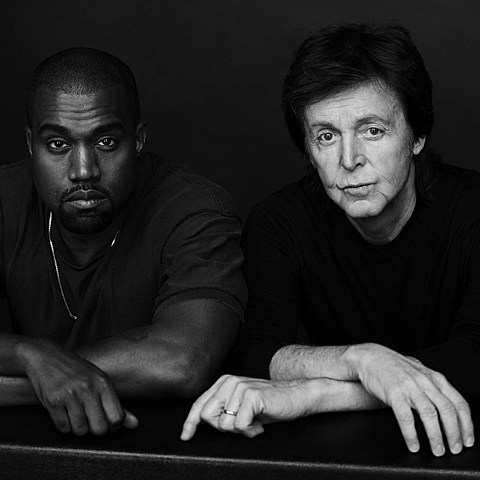 As always, there's been some notable news in the hip hop community lately -- like the new N.E.R.D. songs -- and now that the holidays are behind us, we're taking this chance to round up some of the stuff we've missed. Here's some of that news, plus a few upcoming NYC shows...

As you may have heard, on New Year's Day Kanye West and Paul McCartney released a collaborative track called "Only One," which a press release calls "the first publicly available recording from what has become a prolific musical collaboration between these two legendary artists" and is sung from the perspective of Kanye's late mother. The idea of Yeezus and Sir Paul on a track together may seem more like it'd happen for the novelty of that collaboration than because they work really well together, but if you haven't listened you should check this song out. It's very good.

Onetime Kanye tour DJ A-Trak (who thinks, despite what you say, that 2014 was one of the best years for rap) reunited Dipset members Cam'ron and Juelz Santana on the single "Dipshits" in 2014, which was followed by a full Dipset set at Wu-Tang's Barclays Center show. Now, the group of Cam'ron, Jim Jones, Juelz Santana and Freekey Zekey are preparing to continue that reunion with a mixtape and a five-stop US tour this year. The plans were revealed by Funkmaster Flex on Instagram (via FACT). No tour dates announced yet, but stay tuned.

Cam'ron's sorta-recent Fool's Gold Day Off showmate Danny Brown is also up to something, it's non-musical though. He told Australian radio station Triple J (via FACT) that he's working on a Dr. Seuss-inspird children's book:

"It's really about self-esteem in black girls, I guess", says Brown. "You know how black women do so much - process their hair, change their eye colour - it's really about a little girl who does all these things to herself and changes herself and she realises she's just better off the way she is."

Brown started writing the book for his daughter, and claims that he "wants it to be real Dr. Seuss-y. The Grinch, Green Eggs And Ham, and One Fish, Two Fish - what was going on in that guy's brain to be able to write those things? I think I AM Dr. Seuss! I'm The Grinch, I'm all his characters come to life in rap music."

That should be interesting. In less positive news, Danny's fellow "1 Train" rapper Joey Bada$$ was charged with assault after allegedly punching a security guard at Australian music festival Falls Festival, Australian Broadcasting Corporation reports. The guard allegedly told police he thought Joey was an unauthorized person. After the incident went down, the guard was treated for a broken nose and other facial injuries, and Joey was arrested after the show. Pitchfork points out a representative for Joey offered an official statement reading "There was a misunderstanding with security at the Byron Falls Festival show, which resulted in charges being laid by NSW Police. After fully cooperating with Police, Joey was granted bail and entered a plea of not guilty to the charge."

Death Grips before they "broke up" (more by Wei Shi) 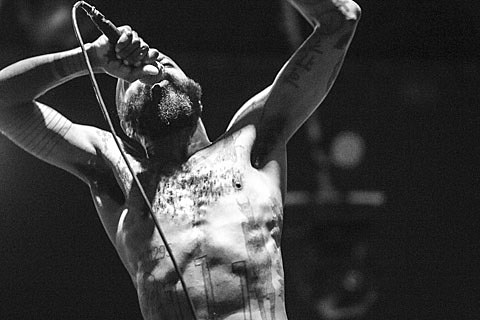 In rap news that is just kind of weird, Death Grips, who are supposedly broken up, released a new instrumental album called Fashion Week that you can download for free. They also announced that their double album, The Powers That B, will actually come out as a physical release on February 10 via Harvest Records.

Now for some upcoming shows. Father, who we mentioned is opening for Theophilus London on February 16 at Bowery Ballroom (tickets), is also playing his own show on January 22 at Baby's All Right with special guests. Tickets are on sale now. His album, Young Hot Ebony, made Stereogum's 40 Best Rap Albums of 2014 list, it features iLoveMakonnen and others, and can be streamed below.

Two days earlier than that is the next 'Hot 97 Who's Next' show at SOB's (1/20) with a lineup of NJ rappers Kazzie, Dougie F., Fetty Wap and KC Bandz. Tickets are on sale now. Dougie F put out the single "Back Up On It" on Mad Decent not long ago. You can watch the video for that, with a Fetty Wap video, below.

For something more classic, Brooklyn vets Smif-n-Wessun are celebrating the 20th anniversary of their 1995 debut, Dah Shinin', on January 14 at SOB's. Tickets are on sale.

One last thing, while Run the Jewels (El-P + Killer Mike) was by far the consensus hip hop favorite of 2014 (and many critics' favorite of any genre), with duo Freddie Gibbs & Madlib trailing not far behind, it was the duo of Royce da 5'9" and DJ Premier, aka PRyme, who topped HipHopDX's list. As discussed, PRhyme's tour hits NYC on February 22 at Highline Ballroom. Tickets for that show are still available.

Kanye West & Paul McCartney - "Only One"