iLoveMakonnen at Warm Up last week (more by PSquared) 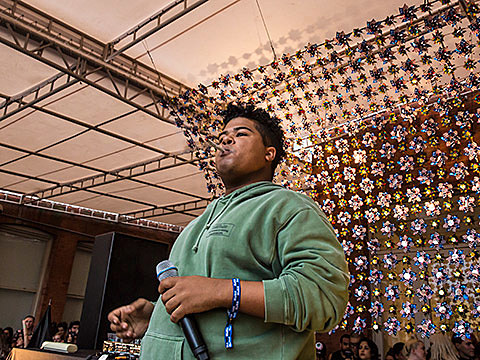 Buzzy, Drake-approved rapper iLoveMakonnen had two NYC shows scheduled including one for tonight (9/12) at Gramercy and another for September 25 at Baby's All Right. Tickets for the Baby's show are still available, but tonight's Gramercy show has been cancelled. Refunds are available. Instead, Makonnen will now play another NYC show on Tuesday, October 21 at SOB's. That's the first night of CMJ but it's not clear yet if it's an official show. Tickets are on sale now. Stay tuned for possibly more CMJ shows.

Makonnen isn't the only good hip hop show in NYC that was recently announced. Here's a roundup of a few of the others...

Open Mike Eagle, whose great Dark Comedy LP came out earlier this year, plays a NYC show on October 14 at Glasslands with an all-around impressive lineup of Serengeti and Billy Woods. Tickets are on sale now.

Power 105.1 Powerhouse returns to Barclays Center on October 30 this year with J. Cole, Ne-Yo, Jeezy, Kid Ink, T.I., Childish Gambino, French Montana, Migos, Tinashe, and another newly buzzed-about rapper, Bobby Shmurda, whose single "Hot Nigga" has gone pretty viral thanks to Bobby's "Shmoney Dance" in the video which since inspired the song "Shmoney Dance" by Rowdy Rebbel, featuring Bobby Shmurda. You can watch both of those videos below. Tickets for Power 105.1 Powerhouse are on AmEx/Live Nation presale now, with a general on-sale starting Monday (9/15) at 10 AM.

Kevin Gates, who was already in town for a couple of his own shows earlier this year, will return to open for B.o.B. on November 24 at Irving Plaza. Tickets for that show are on sale now.

Joell Ortiz of Slaughterhouse is releasing a new album, House Slippers, and celebrating on Tuesday (9/16) at SOB's. Tickets are on sale.

Fabolous was supposed to play BB King's on August 23, but that show ended up being rescheduled to September 27. Tickets are on sale and all tickets from 8/23 will be honored. Fabolous also plays the Def Jam 30th anniversary celebration at Barclays Center.

Those are of course just a few of the many great hip hop shows coming up in NYC. Other previously discussed shows include Vince Staples, Tyler the Creator, Wu-Tang / Dipset, The Weeknd / Schoolboy Q, Vic Mensa / Iggy Azalea, Ab-Soul (which Bas was added to), Big K.R.I.T., Joey Bada$$, Run the Jewels, Flatbush Zombies / Underachievers and still more. What else?