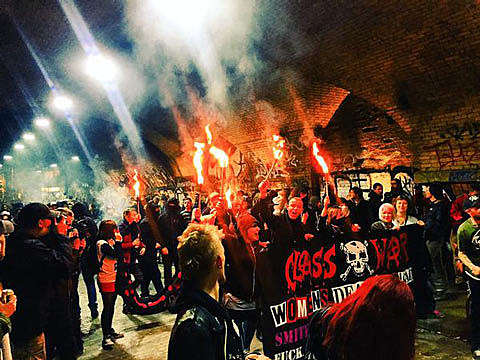 London's Brick Lane, once home to dozens of curry shops, has become gentrified with high-end boutiques, clubs, galleries, and the Cereal Killer Cafe which only serves breakfast cereal (at around $6 a bowl). An anarchist group called Class War held a protest on Saturday, September 26 targeting the Cereal Cafe as part of their third-annual "Fuck Parade":

Hundreds of protesters attacked a cereal cafe in east London on Saturday night, daubing the word "scum" on the shop window and setting fire to an effigy of a police officer.

Riot police were called in to defend the Cereal Killer Cafe in Shoreditch after it was targeted by a large crowd of anti-gentrification activists carrying pigs' heads and torches.

The owners of the cafe, which has been seen by some as a symbol of inequality in east London, said on Sunday that the attack left customers including children "terrified for their lives".

Gary Keery, 33, who founded the cafe with his twin brother, Alan, said: "It's senseless violence, isn't it? We've had some letters through the letterbox saying 'die hipsters' and stuff but nothing to this extreme. It just doesn't make sense." - [The Guardian]

One of the protesters talked anonymously to The Gaurdian:

At the weekend I was one of hundreds of demonstrators who took to the streets of Shoreditch in London, in the third incarnation of Class War's fuck parade, a protest-cum-street-party against gentrification. During the evening some paint and cornflakes were thrown at the Cereal Killer cafe on Brick Lane, which received a lot of attention, while the issues at the heart of the protest - inequality and social cleansing - were largely ignored.

While I sympathise with the workers who had to clean up on Sunday, and am deeply sorry that some children were intimidated by the protest, the petty vandalism that occurred pales in comparison to the brutality of the gentrification that is destroying the lives and demolishing the homes of some of London's most vulnerable people.

You can check out footage from the protest, shot from inside Cereal Killer Cafe, below.