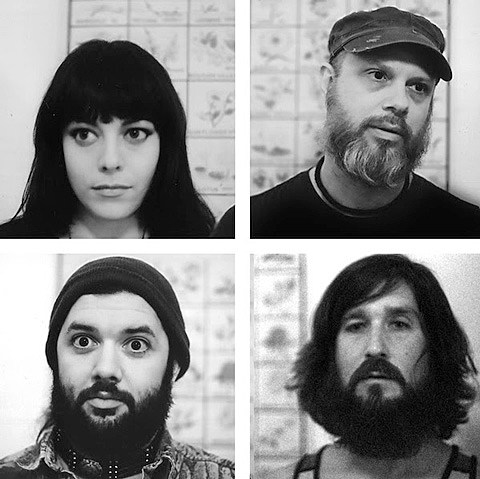 "Michigan's finest," His Name is Alive, released their 14th album, Tecuciztecatl, last month via Light in The Attic (they're not just reissues). It's a rock opera heavy on Thin Lizzy-style twin guitar leads (heavily researched, actually) and a pitch-black plot:

...imagined vaguely in the shape of a 1969 Hammer horror film: bloody, British, gothic, and brimming with beguiling and attractive vampires. The songs are written from the perspective of five characters: the mother, the doctor, the twins and the librarian whose side hustle is demon hunting. The story begins with a young woman getting an ultrasound who discovers she's pregnant with twins. Realizing something is going terribly wrong, "I think I'm missing something on the inside," she visits a local library for research. The librarian instructs the woman on how to kill the demon baby without harming the other twin, and together they carry out the various rituals necessary. Eventually one baby is born.

For those who aren't paying too much attention to the narrative, guiding force Warren DeFevre continues to make the music equally engaging. You can stream "African Violet Casts a Spell" from the LP below and stream the whole thing via Spotify.

Celebrating their 25th anniversary next year (the first half of their career as one of 4AD's signature artists), HNIA will be on tour in 2015, including NYC at Rough Trade on February 10. Tickets for that show go on sale Friday (11/14) at noon.

All tour dates, plus streams, below...