Hiss Golden Messenger at Glasslands in 2013 (more by PSquared) 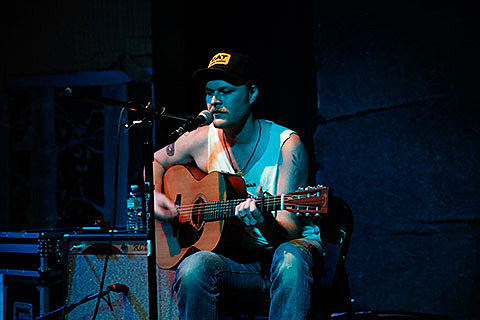 Hiss Golden Messenger, the project of Durham, NC folk singer M.C. Taylor, released their most recent album, Haw, last year, which was the followup to 2011's breakthrough Poor Moon. Last week (1/14), the Paradise of Bachelors label just reissued another HGM album, Bad Debt, which Taylor recorded directly to a portable cassette player in his kitchen in 2010. Most of the original CD-only pressing was destroyed in a warehouse fire during the 2011 London riots and it's limited vinyl release is long sold out.

The record was recorded while his one-year old son was sleeping in the next room, and it certainly sounds like the type of raw, home-recorded album one would make quietly enough to not wake up anyone else in their house. Sort of the way I imagine Sibylle Baier's "Tonight" was literally recorded in the middle of the night after a long day at work (whether or not it actually was). You can stream one of its tracks, "Drum," below. If you like what you hear, the record can be streamed via RDIO and purchased at the Paradise of Bachelors webstore.

Hiss Golden Messenger has a European tour coming up, and after that he's got more US shows scheduled including one in NYC happening on March 2 at Mercury Lounge. Tickets for the NYC show go on sale Friday (1/24) at noon.

! = performing "Bad Debt" front to back