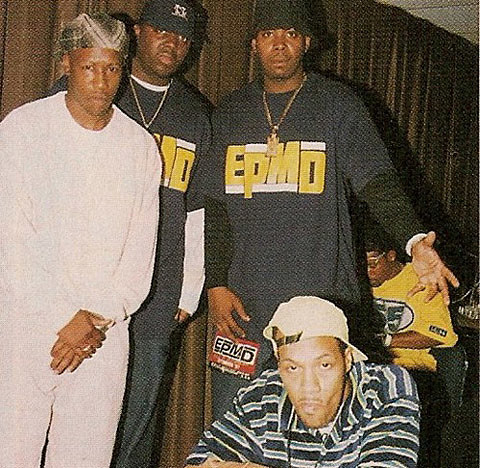 Best Buy Theater in Times Square will welcome the return of the Hit Squad on February 24th, the hip hop crew which included EPMD, Redman, Keith Murray, K-Solo, and Das EFX before splintering into the Def Squad after the EPMD break-up. The show will feature all previously-mentioned members (and not Hurricane G or Knucklehedz) including Erick Sermon who has recoverd from his recent heart attack scare:

"I sat on the sofa and I got two sharp pains on my left-hand side," Sermon, 42, told Sway from the hospital where he has been recovering for the past five days.

The platinum producer didn't think much of the pain, though, and instead of seeking help, just shifted to a better position on the couch and kept watching TV. The next afternoon, Sermon began experiencing the pains in his side again and decided to head to the hospital. "When I got there, as soon as I hit the door, my whole left side cramped up on me and the heart palpitations started going really fast again and I started to get the pains again," he recalled.

The Long Island, New York, rap star seemed to have taken action just in the nick of time. According to Sermon, his blood pressure was "200 over 190," and if he would've waited much longer, things could have gotten far more serious. -[MTVNews]

Get some rest Sermon! See you at Best Buy Theater on 2/24. Tickets go on sale Saturday.

Check out some classic Hit Squad (and related) videos below.

Keith Murray - The Most Beautifullest Thing In This World

Keith Murray - Its That Shit