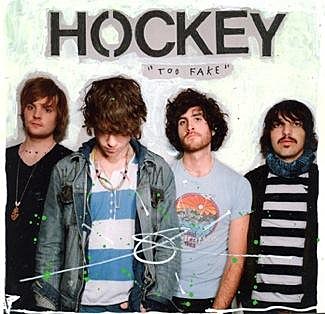 There's no doubt that the Capitol/Virgin-signed Portland, Oregon band Hockey have some catchy songs, but my current take on the self-described "New Wave / Soul" group is undecided, but leaning towards..."too fake"?.

"Too Fake" is actually the name of the first, LCD Soundsystem-biting, track streaming on their MySpace. It's also the name their 7-inch single being released on March 2nd. In September, they received the honor of the Guardian's Band of the Day...

Too Fake presents Hockey's funky verbosity in all its glory, all hi-hat and harangues, forming an arresting statement of intent that sees the frontman declare in no uncertain terms, "I've got too much soul for you and it's breaking my heart in two!", 3am Spanish is a tumble of narcotic imagery and nagging hooks, like Mink De Ville had they spent longer at Studio 54 than CBGBs. Curse This City isn't miles removed from Primal Scream when they do funky while Work, possibly the best track, recalls the Stones when they went disco circa Miss You, and Preacher, like much of Mind Chaos, is maddeningly infectious. Song Away, one of many potential singles on the album, is almost too memorable - you can imagine radio going mad for this song about songs, with its references to "Roxy Music" and "80s grooves", and driving you mad next summer.

What are they like live? I know they were here for CMJ. Did you catch them? Regardless, they are back to play, not one or two, but FOUR NYC shows in the next four days.

The first is tonight, Wednesay January 21st, at Union Hall in Brooklyn. They play on what is actually an interesting three-band bill that's rounded out by Oklahoma's Colourmusic and Oregon's David Karsten Daniels who just finished some dates with Frightened Rabbit.

NYC show #2 is Thursday at Santos Party House. They share that bill with Cale Parks of Aloha and now-solo-on-Polyvinly Records fame.

The third one is Friday at Mercury Lounge. Futurecop!, Hey Willpower, and Theophilus London are also on that bill.

Last but not least, number four is at Pianos on Saturday. At that one they go on right before (Olga) BELL 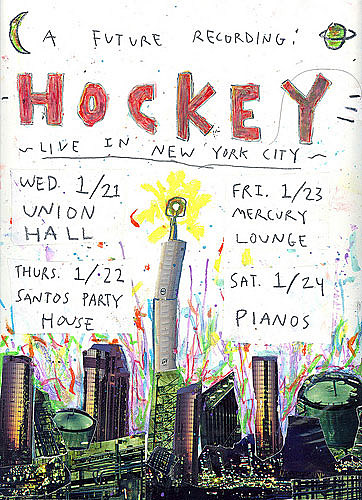