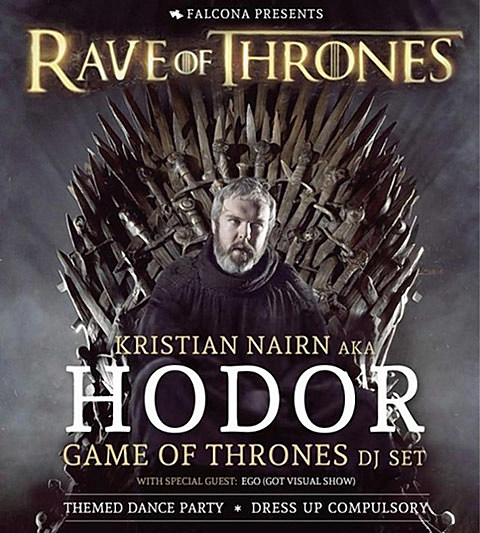 Some of you might know that Kristian Nairn, who plays fan-favorite, simpleminded bi-syllabic Hodor on Game of Thrones, is also a respected house DJ. He was the resident DJ at Belfast's Kremlin club for 11 years and has DJ'd massive parties in Ibiza and elsewhere. He's combining his two claims to fame for the "Rave of Thrones" DJ tour which is happening across Australia later this summer. It promises a GoT-themed set and "some of the deepest house from all seven kingdoms." Game Of Thrones fancy dress encouraged.

Nairn hasn't mentioned bringing Rave of Thrones to NYC, but he will be here for NY Comic Con, appearing at the NYCC Autographing Area on October 9 & 10. Also there on the same days will be Natalia Tena who plays wilding Osha on Game of Thrones. She's musically minded too, and is lead singer and accordion player in the six-piece "gyp-step" band Molotov Jukebox.

All "Rave of Thrones" dates are listed, along with two new Kristian Nairn DJ mix streams, below...