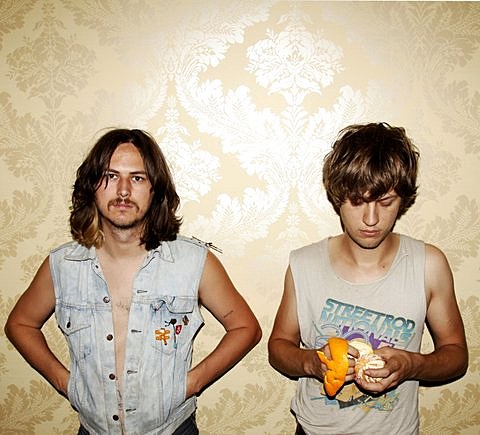 JEFF the Brotherhood, who are just wrapped up a tour with Best Coast, have been on a steady climb for the last three years or so, touring their asses off, playing killer show after killer show and cranking out awesome records to boot. And even while the venues get bigger, JEFF always make a point to play smaller shows as well -- they have pretty much fit in a Death by Audio show every time they come through NYC. To boot, Jake and Jamin are also two of the nicest guys you're likely to meet.

I have a feeling JEFF are about to bust wide with their new album Hypnotic Nights, their first for Warner Brothers and maybe their best yet. Co-produced by JEFF and Black Keys' Dan Auerbach, the album is one catchy, crunchy jam after the next. And while I'm pretty sure Jake's guitar still only has three strings, the album sprinkles in keyboards and other instrumentation (did I hear saxaphone in there?) to fill out their sound just a bit. But it's the songs that make this record, crammed with stick-in-your-head hooks and riffs, "ooh oohs," "whoa-ohs" and big sing-a-long choruses that make this such a fun, inventive album. Oh, and it rocks. It's out Tuesday, July 17 and if you pre-order the album through their website you get a free can koozie, button and bumper sticker. It's streaming in full at NPR.

BrooklynVegan is happy to announce we're presenting a record release show at Santos Party House on Wednesday, July 18 with openers Fuck Ton. It's in the smaller Santos basement, not the main room, and is FREE. First-come, first served. Doors are at 8PM and the show's at 8:30PM. Flyer for the 16+ show is below.

We're also giving away five autographed vinyl copies of Hypnotic Nights with multi-use gatefold sleeve and a CD of the album too. Details on how to enter are below. 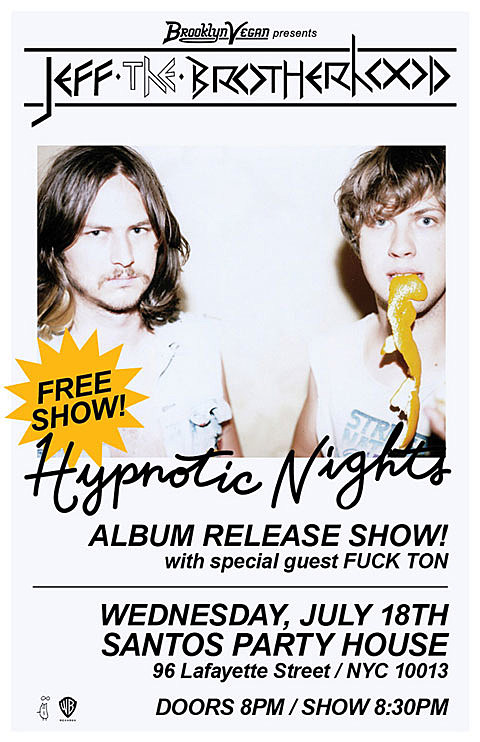