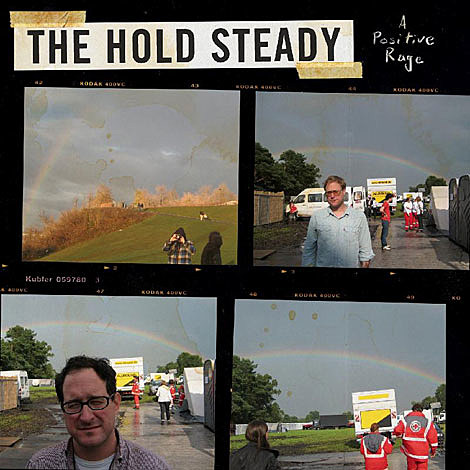 Vagrant Records and The Hold Steady announce an April 7 release date for A Positive Rage, a double disc package featuring a documentary on DVD and their first-ever live album. The set will be released on April 6 on Rough Trade Records in the UK and Europe.

A Positive Rage captures the excitement and high spirits of both the band and their fans in the days surrounding the release of their third full-length, Boys and Girls in America, (Vagrant) and ensuing world tour in 2006.

The 53-minute documentary begins with The Hold Steady's first ever London performances with never-before-seen live footage, back stage interviews with the band members, fan commentary and the original, raw audio. Cameras follow the band as they return to the US for a 24-date tour that culminates on screen with an especially poignant performance at First Avenue in Minneapolis.

The live album was recorded on October 31, 2007 and includes seventeen songs that Craig Finn, Tad Kubler, Galen Polivka, Franz Nicolay, and Bobby Drake performed on the second of their two-night sold-out stand at the Metro in Chicago. The enhanced album will also feature five bonus studio tracks: "Ask Her For Adderall," "Cheyenne Sunrise," "Two Handed Handshake," and the previously unreleased tracks "Spectres" and "40 Bucks."

The booklet features personal photos and the band's memories of the tour, including this excerpt from Craig Finn... "It ended up being a fantastic suburban blow out with band and audience on the floor, Frisbee and tailgating in the adjoining parking lot, and everyone singing along to every song.... It reminded me of the hardcore shows I loved as a kid, everyone sweating and screaming together in a rented hall. And drinking in the parking lot, of course. The next night worlds converged.... "

The Hold Steady, in addition to appearing at SXSW in mid-March, will kick off their late-March-into-April tour at Irving Plaza in NYC on March 30th. $25.00 tickets to the "WRXP Anniverary Show" will go on sale Friday February 20th at 10AM via LiveNation.com. Openers TBA.

In related Vagrant news, they just announced that they signed the UK's Olivia Broadfield. "I have been blown away by how well things have been going for me over the past year and signing with Vagrant is quite simply the cherry on top," said Broadfield. "I am so excited to be working with Vagrant, they have shown such faith and belief in me as an artist and I know that my album will be in good hands. It's taken a lot of hard work to get this far and I can't wait to take things to the next level with Vagrant by my side."