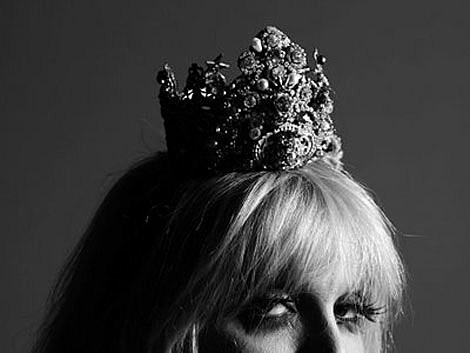 There have been a few "big" SXSW-related announcements over the past few weeks. Stone Temple Pilots will be there. Big Star will too. Broken Bells are making a high profile appearance at the NPR show at Stubb's on March 17th (the show Spoon headlines). And... "Hole" is headlining the invite-only SPIN day party at Stubb's on Friday, March 19th. Crazy Courtney Love (who is on the cover of the new SPIN) has an all new band and a new album entitled Nobody's Daughter (out April 27th). If she actually shows up to Austin, as anyone that was at All Points West in 2009 can attest, I'm sure this year's SXSW will be full of Courtney sightings all week long.

It was previously reported that because of founding Hole member Eric Erlandson's legal rights to the band name, the new album would have to be released as a Courtney Love record. That seems to have been resolved. It was also originally/occasionally reported/misreported that bassist Melissa Auf der Maur would be part of the reunion, though that doesn't seem to be the case either. Instead, the lineup for Hole will include "23-year-old British guitarist Micko Larkin (formerly of London indie rockers Larrikin Love), bassist Shawn Dailey (of Rock Kills Kid), and drummer Stuart Fisher. (Jack Irons, formerly of the Red Hot Chili Peppers and Pearl Jam, played drums on the album.)"

"Skinny Little Bitch," a track from the new Hole album, is available on the record's site today (3/4) only.

After SXSW, Hole has shows scheduled in L.A., NYC and the UK in April and May. The band plays Terminal 5 on Tuesday, April 27nd. Tickets are on sale Friday, March 12th at noon.

All tour dates, a recent Hole TV performance and the new song are below...