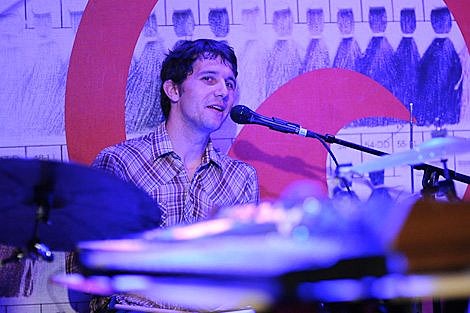 For a while it didn't look like Saturday's (4/24) Bruar Falls First Anniversary show was going to be much of a party. The 1990s are stuck in the UK thanks to that pesky volcano, and German Measles canceled due to a death in the family.

To say they've recovered is a bit of an understatement. Check out the new line-up: Holiday Shores, Micachu & the Shapes, Beach Fossils, plus house band Moonmen on the Moon, Man. There's also DJs Peggy Wang (of Pains at Being Pure at Heart) and Shirley Braha (of NY Noise), plus balloons and a 1AM open bar. It should be mentioned that the show is FREE.

Holiday Shores will be running over to Bruar following their opening set at the Morning Benders show Brooklyn Vegan is presenting at Music Hall of Williamsburg (we added them a while ago, but didn't rush to announce it because the show was already sold out), that now also includes our Montreal friends The Luyas (who we added yesterday!). Meanwhile Micachu have been stuck in the U.S. also thanks to the volcano, and have been playing around NYC to keep themselves busy. Maybe you saw them last night at Mercury Lounge. And Beach Fossils are one of the areas best new bands, and put on a fun live show -- they were great last Friday at Bruar Falls, even with a substitute drummer.

Bruar Falls has become one of my favorite places to see a show (living two blocks from it doesn't hurt) and there's always a nice community vibe there. It's been a great addition to the Williamsburg music scene. Between the bands, the free booze, the balloons and the very affordable entrance fee, this should be a hot ticket even on a very busy Saturday night. You might want to get there early.

Speaking of Saturday, The Music Hall Show on Saturday with Morning Benders, Holiday Shores and The Luyas is sold out, but if you really want to go we're giving away a pair of tickets. Just send an email to BVCONTESTS@HOTMAIL.COM with "Morning Benders" as the subject. We'll pick a winner at random and be in touch with the lucky person tomorrow.

In other news, the 1990s show at The Bell House that was supposed to be tonight has been rescheduled for next Friday, April 30 (the whole show, not just the 1990s). Crystal Stilts, The Oranges Band (who just opened for the Hold Steady at Music Hall) and The Forgery Series (featuring Sohrab of Obits) will open. No word on whether the 1990s will play a makeup date for Bruar as well, but we'll keep you informed.

Check out a Holiday Shores video below...