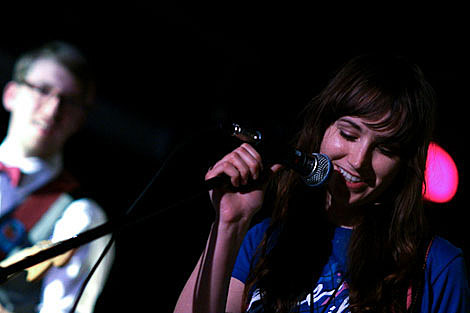 "XL Recordings is excited to announce the signing of HOLLY MIRANDA. Holly is a New York based musician and her debut album will be released in early 2010. It will be preceded by a 7"/digital single in November with a song called "Forest Green Oh Forest Green" and a cover of Yoko Ono's "Nobody Sees Me Like You Do".

Holly has been singing for as long as she can remember. She first began playing in New York at age 16, when she dropped out of high school in Michigan, told her mom she was going to visit her sister in New York for a few weeks, and never turned back. She soon discovered the world of the East Village and started playing at places like The Sidewalk and meeting kindred spirits in the New York scene. Whether solo or with her band, she's become an artist consistently able to mesmerize with her range as well as her songs.

Holly starts a tour with Antlers tonight, and will be in Europe in October for shows with Wild Beasts and The xx."

Holly was of course also in The Jealous Girlfriends. Congrats Holly!

The Holly/Antlers tour hits Maxwell's in Hoboken on October 3rd.
Tickets are on sale.

Holly and The Antlers are both also playing CMJ, but not necessarily together (though you never know). One of the shows Holly is playing is at Le Poisson Rouge on October 23rd with Miles Benjamin Anthony Robinson, Cymbals Eat Guitars, and Glasser. Stay tuned for more announcements related to that. All dates below...