Holly Miranda at Littlefield in 2010 (more by David Andrako) 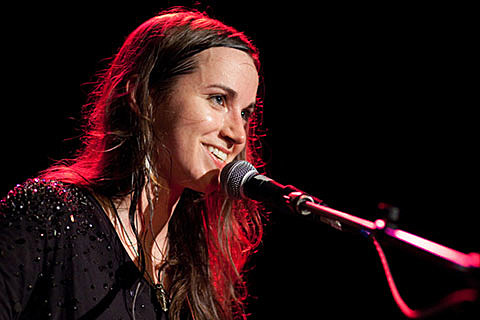 Holly Miranda hasn't released an album since 2010's The Magician's Private Library, and she's been in the studio recording its followup this year, so an official announcement of that may be coming soon. She recently posted a 45 second studio teaser of a new song she's working on, "Fuck In The Sun," which you can watch/hear HERE. She was also featured on the MMOTHS track, "All These Things," from their new EP, Diaries, which is out now. You can stream that track below.

Holly doesn't have a tour scheduled at the moment, but we do know that she'll be in NYC for a show on June 2 at Glasslands with Timmy Mislock, William Carl Jr, and Joseph Reuben. Tickets for that show are on sale now.

UPDATE: Holly Miranda also plays Rockwood Music Hall on April 9 and April 23. Both shows start at 9 PM and both are totally free.