Holopaw at Bowery Ballroom in 2010 (more by Andrew St. Clair) 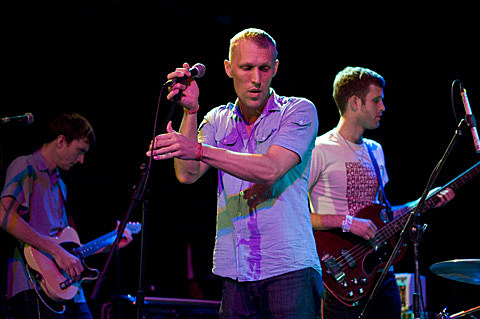 Gainesville indie rockers Holopaw released their new album, Academy Songs, Volume 1, earlier this month (1/15) via Misra Records. They'll be supporting the album on a tour which includes some Northeast dates with Love as Laughter, including two in the NYC area: Mawell's on February 5 and Knitting Factory on February 8 with We Can't Enjoy Ourselves (ex-Extra Life). Tickets for the Maxwell's show and the Knitting Factory show are on sale now. While they're here, Holopaw will also do a free in-store at Permanent Records on February 8 at 6:30 PM.

In related news, Ape School (who feature an ex-member of Holopaw) was supposed to play a Brooklyn show at Cameo this Saturday (2/2), but unfortunately they had to cancel.

A stream of "Golden Sparklers" from the new Holopaw album and a list of all dates below...