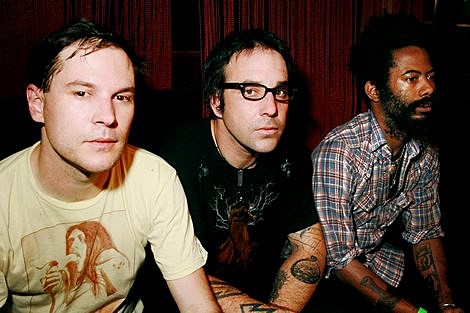 Emil Amos aka Holy Sons (and half of Om) will hit the road for a string of dates with Scout Niblett in September including Knitting Factory in Brooklyn on October 5th (tickets) and Mercury Lounge on October 6th (tickets). It'll be the first ever Holy Sons US tour.

The string of US dates should be a cakewalk after what Scout Niblett recently undertook...

Limited Edition! Only 100 copies. Buy your very own version of the song "The Calcination of Scout Niblett" from the Drag City album of the same name. Each version different, recorded by Scout herself.

Those CD-Rs are long gone, but the album of the same name is out/available via Drag City. Download one of, I am guessing, the 100+ versions of the song "The Calcination of Scout Niblett" above. Scout is also confirmed for the Godspeed You Black Emperor curated version of ATP's Nightmare before Christmas. The full and updated lineup for that show in the UK (which now includes Neurosis!) is below.

Meanwhile, Emil has dropped more tidbits about his upcoming project of which, as always, there are many:

...Happiness!,,, I just turned in the new HolySons record,, it's a nightmarish/monster jam that boasts the best artwork yet/ever... 'twill not disappoint!... haven't taken a break since-- been digging out older stuff,, fucking with new stuff,,, ...still planning a killer split release,,, and I've finally decided to prepare a re-release of 'My Only Warm Coals' [ED: which he described in a previous interview] next,, god knows when it will come out exactly... but I've got like 18 bonus tracks for it...

Wow, Grails just dropped Black Tar IV and they're on to V. Congrats boys. Grails is currently mixing the above mentioned new full-length for Temporary Residence LTD. Details are forthcoming.

In addition to the above, Holy Sons will release their new full length (numero nine!) Survivalist Tales via Partisan Records on October 12th. Tracklisting for that LP is below.

Emil recently came back from tour with Om who will record their new LP this week in Seattle. Meanwhile, Al Cisneros of Om will be back in NYC on September 8th to play Brooklyn Masonic Temple with Sleep. There he will be joined by A Storm of Light and his touring bandmate Rob Lowe performing as Lichens. Tickets are still available.

Full tour dates, ATP The Nightmare before Xmas Lineup, videos and more are below...

Holy Sons, "All Too Free"

HOLY SONS - Things you do while waiting for the apocalypse