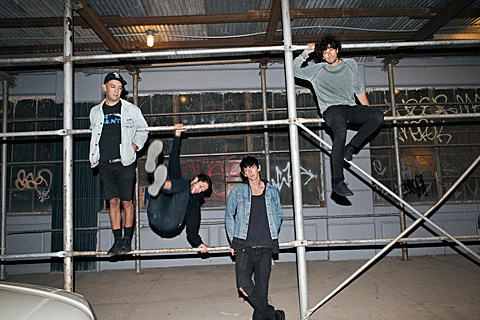 Brooklyn band Honduras are getting ready to record their debut album, but in the meantime a brand new EP, titled Break, will be released on November 10 via Black Bell. We've got the premiere of the video for the EP's lead track, "Illusion." Directed by P. Nick Curran, it plays off the song title, following singer Pat Phillips around on a hallucinatory night. Low budget, but they did a lot of cool stuff with what they had available. Watch it below.

Honduras have three upcoming NYC shows: Saturday (11/8) at Nola, Darling in Chelsea (161 W. 22 St.) with The Yin Yangs, Video Daughters and Chimes; then Sunday (11/9) at Cameo with Locals and Truthers (tickets); and finally Silent Barn on November 12 with Big Muff Radio, Dances, Journalism, and Grey Idols.