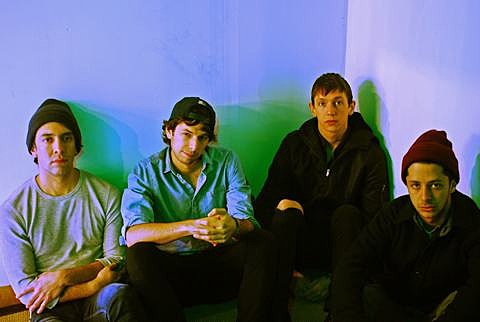 Brooklyn band Honduras have been a constant on bills for about two years now. Most recently, you may have seen them opening the Total Slacker / Perfect Pussy show at Baby's All Right last week (2/12). The band bring a lot of different influences to the table. A little garage, yes, but there's '80s/'90s British indie too. While it may not be anything you haven't exactly heard before, Honnduras write very hooky songs and, as importantly, the bring a real energy to the performance.

The band's new EP, Morality Cuts, is out next week via Black Bell Records and offers five good examples of what Honduras do well. We're premiering a stream of the whole thing in this post.

The band's next gig is opening for UK indie band Kaiser Chiefs' sold-out show at Music Hall of Williamsburg tonight (2/19) so if you're going to that be sure to check 'em out. (PS, Kaiser Chiefs also just announced a Webster Hall show for 6/20, tix on sale 2/21 at noon.)

Honduras will then play a record release show at Radio Bushwick on March 1 with Dead Stars, Beiju and The Gradients. The band will also be at SXSW this year so look out for them there if you are going.