Hooded Menace at Union Pool in 2011 (more by Fred Pessaro) 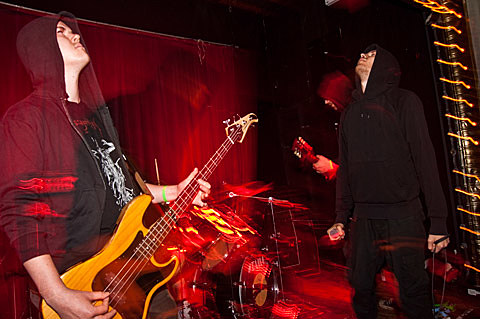 Finnish death/doomers Hooded Menace are set to swing their Hammer horror at metalheads in select North American locations. The slow n' low callers of the subsonic wums will sandwich their Maryland Deathfest date between shows in New York, Philadelphia, and Montreal.

While their moniker would suggest otherwise, members of the Hooded Menace quartet have made many appearances in other bands (Acid Witch, Claws, Ruinebell, Vacant Coffin, to name a few), giving them the stacked CV of a supergroup. And, there's no denying their supernatural talent, ably infusing dirges and abrasive gravediggers with the concrete grit of death metal hooks. Their last long-player, the Relapse-released Effigies of Evil, shambled out the studio in 2012. That said, the group has again been bustling with EPs and splits, allowing fans to feast on two through Doomentia Records. If your belly grumbles for grindhouse devastation combining buzz with schlock, Hooded Menace are your new mates.

The kick-off for the four concert mini-tour will take place tonight, May 21, at Saint Vitus in Brooklyn along with fellow MDF buds Cripple Bastards and Maruta, along with Archagathus and Detroit filling out the night. Tickets are still available. This show was announced originally sans Menace, but, hey, the more the merrier.

Italy's long-running Cripple Bastards' flying metallic core sits close to grindcore, which makes sense they're frequent split collaborators with the scene's leaders and legends. Their latest, 2014's Nero In Metastasi, plays like a crustier version of contemporaneous Napalm Death (who we just caught in Queens). The massive Maruta, who are also touring the US, follow in a similar path, though they take a slightly more technical, death/grind path towards their demolition. Think Assück given a stack of Misery Index tracks. They'll be recording again soon with Scott Hull who will no doubt make them sound gigantic.
On the the other hand, Winnipeg's Archagathus, as one infers from their nom de grind, maul with the low-fi mincecore of Agathocles. Lastly, the even lower-fi Detroit's bursts of powerviolence bring together the worlds of Spazz with the A-side of Scum. In other words, go and grind your darn noggin in

All of the dates (including a Bayshore Maruta gig with Dehumanized, Enabler, and Mother Brain) along with representative (and one not so much) streams of the aforementioned, below....