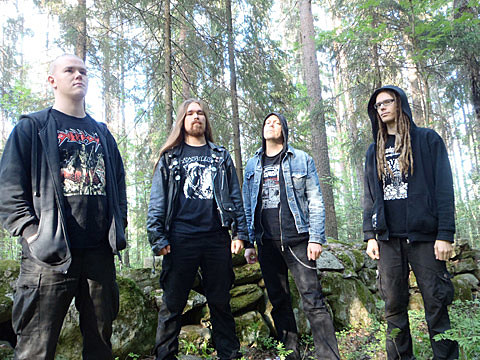 BrooklynVegan & 1000 Knives are proud to present a four-band bill of darkness, headlined by the NYC debut of Finnish death/doom dealers Hooded Menace! The show, which will take place on 5/31 at Union Pool, will see the Roadburn-bound band team up with Negative Plane (!), Anhedonist, and Ilsa as part of a string of dates in between appearances at MDF and Chaos in Tejas 2011.

Hooded Menace released Never Cross the Dead in 2010, and are preparing to release a split 7" with the mighty Asphyx via Doomentia Records. The band is also heading to the studio in February to record two new tracks, though no word on where those will land. Full tour schedule is below.

Negative Plane needs no introduction, as the Brooklyn band's Et In Saecula Saeculorum was a fave among the blackened set. The band recently released the CD version of their new LP Stained Glass Revelations via The Ajna Offensive which features "Angels of Veiled Bone", downloadable for the first time here (it premiered at Invisible Oranges) and streaming below.

For the unfamiliar, Ilsa was named a band to watch by Darkthrone madman Fenriz. The band released their seriously ripping new LP of death/doom odes, Tutti Il Colori Del Buio, via Contagion Releasing. Order a copy, it's pretty great.

Anhedonist's The Drear demo was so well received, that Parasitic will be pressing the (surprisingly melodic!) death-doom release on vinyl for a late Feb/early Mar release.

All tour dates, the song stream and some video is below.