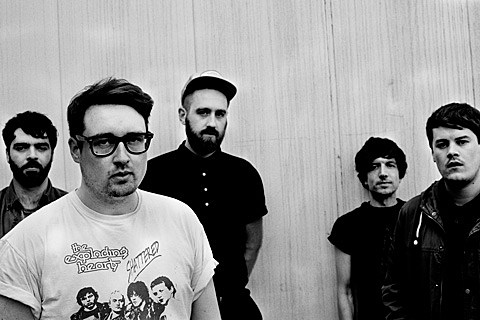 Hookworms' new album, The Hum, finds the Leeds, UK band amping up their droney, motorik sound. The impetus for this in part was "Radio Tokyo," originally released last year as part of the Too Pure Single Club but re-recorded for the new album. They've just released a video for "Radio Tokyo" and director Sam Wiehl has embued a bit of the rush you get at a Hookworms live show. You can watch it below. The Hum is available in a very cool limited edition pressing on clear vinyl with a die-cut sleeve and bonus 7" that's worth picking up.

You can experience that rush that is a Hookworms live show -- singer/keyboardist MJ goes kinda out-of-body like a Pentecostal preacher -- for yourself when the band head out on their first-ever North American tour in April 2015. Those dates conclude with two NYC shows: Rough Trade on April 17 and Palisades on April 18. Tickets for Palisades are on sale now and tickets for Rough Trade go on sale at noon on Friday (12/5).

West Coast shows are well matched with Chicago's Disappears. No word on openers for the rest of the tour but all dates are listed, along with the "Radio Tokyo" video, below...

# with Slowdive
* with Disappears