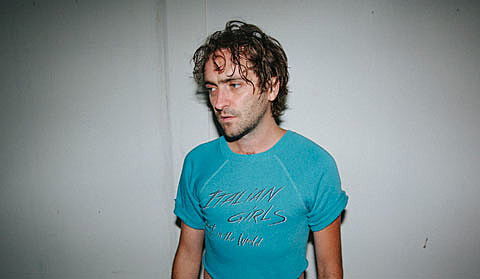 Noel Heroux quietly put his band Hooray for Earth to bed (as in, to sleep with fishes) at the end of last year and is now making music under the name Mass Gothic. He also signed with Sub Pop, who will release his debut album sometime next year. Mass Gothic make their "official live debut" at the Sub Pop/Hardly Art CMJ showcase at Knitting Factory on October 15 with Protomartyr, Strange Wilds, The Gotobeds, and S (tickets) but will "trainwreck some new music" tonight (9/24) at The Gutter with Philosophical Zombie and Garage Sail. That show is $5 at the door. Mass Gothic also play Cambridge, MA in October. All dates are listed below.

Tonight's Gutter show is being thrown by Killer Wail Records, the label run by Heroux and Jessica Zambri. (Zambri's solo album as Solvey came out on Killer Wail.) They'll be putting out Philosophical Zombie's debut album, Loneliness Is Blue And Not Blue, on November 7. You can check out the sludgy-but-poppy "Savage Mercy" from the album, below.