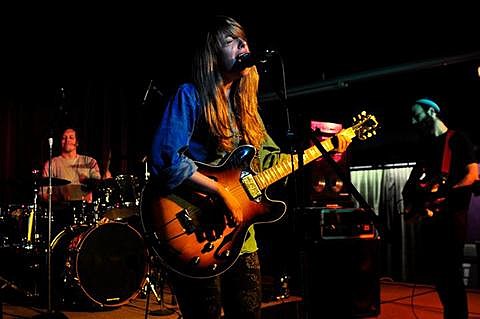 We're reaching the point of the year where all of the exciting music has pretty much finished coming out and you've got some time before next year to check out all of the stuff that might have flown under your radar over the course of the past twelve months. If you've been doing that and haven't already checked out Hop Along's unfairly overlooked (and great) Get Disowned, you should do yourself a favor and give it a listen. I caught the band back in September and they bring it live too. If you like your indie rock of the Don Giovanni variety (Lemuria, Waxahatchee) with a dash of Neutral Milk Hotel, you'll dig Hop Along. You can stream the whole record below ("Tibetan Pop Stars" is a standout).

Before the year ends, Hop Along will make their way over to NYC for one more show here on Wednesday, December 19 at Public Assembly for Bomb the Music Industry!'s fifth annual holiday toy drive. Franz Nicolay (Hold Steady, Against Me!, and more) is also on the bill. Tickets for that show are on sale now. The only other show Hop Along have scheduled at the moment is in their hometown of Philly as an opener at Up Up Down Down Left Right Left Right B A Start's reunion show in January.

A list of all dates and the album stream are below...