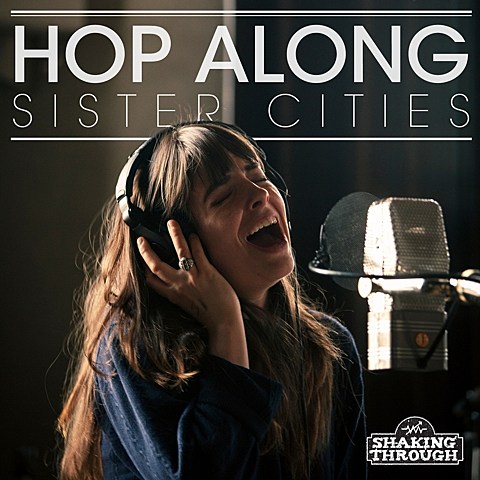 At Hop Along's recent Bowery Ballroom show opening for The Thermals and Screaming Females, they played a new song during their set and mentioned that it would debut on June 5. Well here we are on June 5, and that song, titled "Sister Cities," is out now. It's got a country-punk inspired rhythm rolling through it, and singer Frances Quinlan is at her most expressive, switching back and forth between her folky whisper and her unpolished roar. You can stream the song for below and download it for free at the Weathervane Music Bandcamp.

Weathervane Music is also the organization who just featured "Sister Cities" in their "Shaking Through" documentary series about the "Birth of a Song." In the series, bands record a new song in two days and the process is captured on film. You can watch two videos of that session, which splice together recording and interviews, below. Read more about the session at the Shaking Through website.

Hop Along will be returning to NYC for a free House of Vans show on June 27 with an incredible lineup that also includes Fucked Up and Title Fight (who play NYC even sooner). Though the show is free, RSVP is required, and it opens on Tuesday (6/11).

Videos and song stream below...

Shaking Through: Hop Along

Shaking Through: Hop Along from Weathervane Music on Vimeo.

Shaking Through: Recording Hop Along

Shaking Through: Recording Hop Along from Weathervane Music on Vimeo.