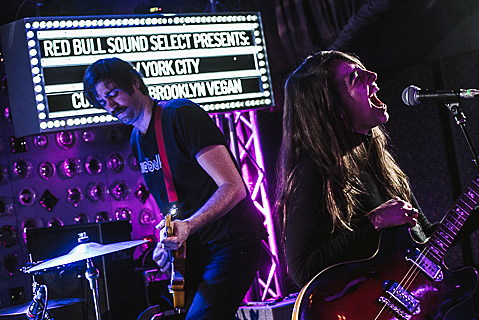 Hop Along already released "Waitress" and "Powerful Man" from their upcoming album Painted Shut (due 5/5 via Saddle Creek), and today they offered up a third track, "Texas Funeral." Hop Along singer Frances Quinlan has one of the most distinct voices in current indie rock, thanks in no small part to the way she goes from softer singing to a raspy yell without any warning or interest in holding anything back. When she brings that yell in on "Texas Funeral"'s chorus of "NONE of this is gonna happen to me!" it's the same type of cathartic release you get from "Stranger in India, I'm gonna be creepin' on you so hard!" or "Meteor, meteor, make me young!" or any of the other lines you can't go to a Hop Along show without hearing the crowd shout. And like the last single, this one's got another ripping solo from Joe Reinhart, whose guitar playing is as important an element of the new record as Frances' voice. Listen below, via Stereogum.

Hop Along's tour hits NYC on May 5 at Rough Trade (tickets) and May 10 at Baby's All Right (tickets). As mentioned, Thin Lips are opening both of those shows, and since we last spoke, Crying were added to the Rough Trade show. Hop Along also recently added Field Mouse and Lithuania (mem Dr. Dog) to several other dates on the tour.

Thin Lips also have a new release coming on May 5, Divorce Year, on Seagreen Records. Its new single "Nothing Weird" came out recently via Stereogum, and you can also hear that below, along with the new Hop Along song and updated list of tour dates.