Hop Along at Wicker Park Fest 2014 (more by Jeff Ryan) 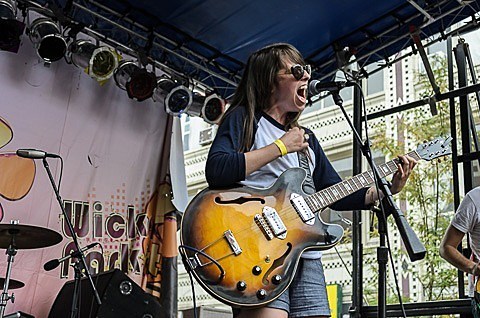 Hop Along have been playing new songs live for a while now, and they've finally announced that they've signed to Saddle Creek for the followup to their great 2012 album Get Disowned. Congrats guys! That makes them labelmates with Bright Eyes, Cursive, The Thermals and more. The album's due out in spring of 2015 and they're entering the studio this week with producer John Agnello, who's work with Sonic Youth, Dinosaur Jr, Kurt Vile, Cymbals Eat Guitars and others makes him a great fit for Hop Along.

Hop Along have a couple dates coming up, including a free Halloween show at Brooklyn Night Bazaar with Diarrhea Planet, Girlpool, Mitski and more, and a New Year's Eve show in Philly.

Revisit Get Disowned below...