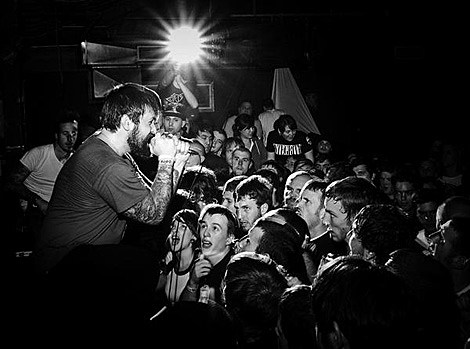 We are proud to present, in conjunction with 1000 Knives and Chronic Youth, The Hope Conspiracy, Blacklisted, United Nations, and Mother of Mercy at Cake Shop on Jan 15th! The date is one of a select few for HopeCon, and the only east coast date scheduled so far. No advanced tickets. Stay tuned for giveaways to what may be the first must-see hardcore show of the new year.

The Hope Conspiracy released the True Nihilist 7" earlier this year on Deathwish. Their last LP was 2006's Death Knows Your Name.

United Nations is a supergroup of sorts, featuring Thursday's Geoff Rickly playing what is described as "emo powerviolence". The Hopecon show isn't the only one that United Nations has lined up, as the band is also scheduled to play Starland Ballroom with Glassjaw, Dillinger Escape Plan, and Rickly's main squeeze, Thursday. Tickets go on sale at noon on 10/30. The show is part of a larger tour. All dates below

They never really seemed to miss a beat, save the quick breaks in among songs, and I think that could probably be attributed to the fact that a lot of these songs have been set staples for years, anyway. They were just stringing them all together here (Rickly's wide-radius mic swinging for the "rain rain down" part in "Paris in Flames" came right on time).

Despite no barrier, Bowery was awesomely lax about crossing the stage threshold; some crowd-surfed, others stage-dove. In the pit, you could witness everything from goofy push-mosh and hardcore two-stepping to that silly watered-down version thereof I remember being amused by at "post-hardcore" shows like these around 2001-2003. Both cases made for a pretty good indicator of the crowd's diverse makeup.

But all loved it, and when the band came back out on stage for a bonus six-song encore it was even better. The audience was notably less responsive for the trio of tracks off Common Existence songs, but the band probably expected this; almost a dozen gigantic black balloon-type spheres were launched onto the crowd as Thursday kicked into the mournful, new wave-y, morose textures of "Circuits of Fever." But when it ended, everyone ceased slapping the buoyant balls into the air and bugged out when the band kicked into their best complex anthem in "Jet Black New Year." And speaking of anthems, "War All the Time" could not have demonstrated that stripped-down quality of Thursday's songwriting better as a closer. [Punk News]

Thursday and Far's set lists from Bowery Ballroom below.

The Hope Conspiracy - "Hang Your Cross" Live in Philadelphia, Jan 2008

The Hope Conspiracy - "They Know Not" Live in Philadelphia, Jan 2008 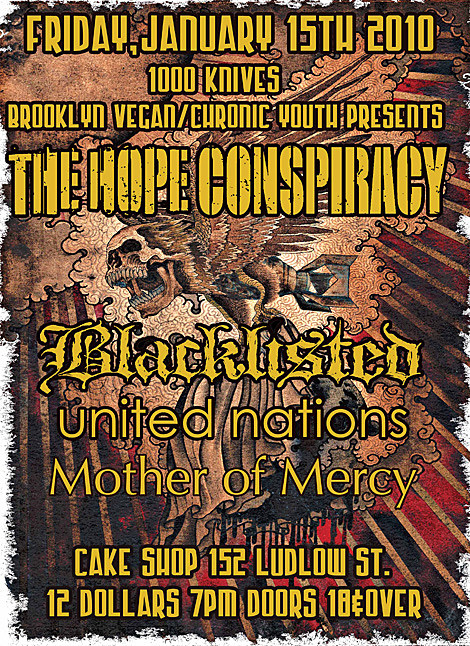