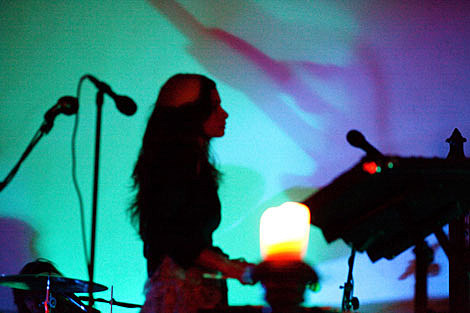 "There was no photography allowed in the venue when Hope Sandoval and the Warm Inventions, the band featuring the revered Mazzy Star vocalist and My Bloody Valentine's Colm Ó Cíosóig, played Hollywood Forever [on September 29th] in a concert marking the release of its latest album Through the Devil Softly. Absolutely none. This rule was stated no fewer than six times on printouts that lined the entrance and parlor room. Perhaps that was for the best. The glare of camera flashes and cell phones pointed toward the stage might have ruined the carefully crafted ambience of the gathering.

With its stone facade, a courtyard lined with twinkling palm trees and mosaic floors, the venue looked like a cross between an Old Hollywood apartment building and a mausoleum. This was seemingly appropriate, as there are probably more than a few people who did time in art deco structures off of Vine or Gower or Franklin who now spend eternity interred in this famed cemetery." [LA Weekly]

The above-described show happened only a couple days after Bon Iver's graveyard show in the same exact location, but got almost no attention (compared to the Bon Iver show anyway). That's partially due to the no-photography thing I guess, but still sad (I wish I planned a vacation around going to both).

Anyway, Hope Sandoval and the Warm Inventions' new album is out now on Nettwerk who also re-released 2001's Bavarian Fruit Bread. Buy it so that Hope knows people care and she keeps making music (though she has already admitted plans for more Mazzy Star).

Her long-awaited return to NYC kicks off with a show at Music Hall of Williamsburg tonight (10/10). It's sold out, but Monday's show at Bowery Ballroom isn't (UPDATE: also sold out).

Dirt Blue Gene is an Irish shoegaze band that is on tour with Hope, and shares members with her band. Some recent live videos, the setlist from San Francisco, and all dates below... 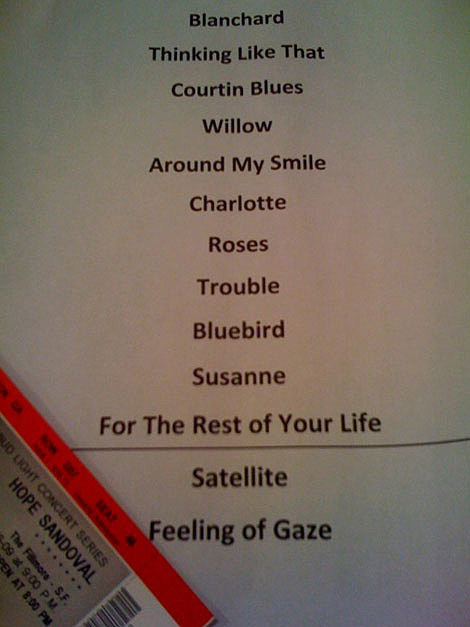