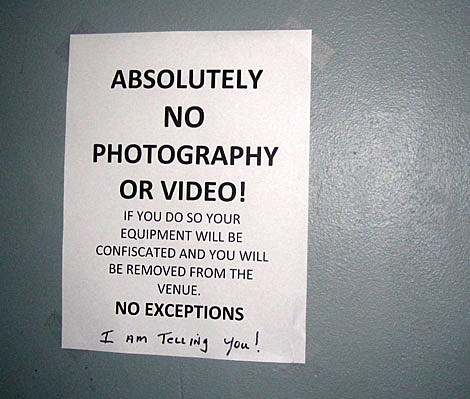 Hope Sandoval & The Warm Inventions kicked off their second NYC show in three days much like they did the first, with the song "Blanchard" and with not enough vocals in the speakers. By song three, an early highlight ("Courtin Blues"), the sound was better. Hope's vocals were coming through loud and clear. I wasn't as close to the stage as I was at Music Hall, so maybe my perspective was different, but the Manhattan crowd seemed way happier to be there than the Brooklyn crowd. The cheers seemed louder and more in line with the return of someone who we haven't seen in seven years. Song four was "Willow" and all signs pointed towards a great show. The projections, though exactly the same at Music Hall, were maybe even better because Bowery Ballroom seemed to have a bigger screen.

Then, 3.5 songs in, all of a sudden the music stopped. Hope couldn't hear herself in the monitors. Some audience members, possibly misunderstanding the problem, started screaming that it sounded great. They weren't lying and it didn't help. Hope continued to stand there. She was growing increasingly frustrated as she expected someone to make it work again. She said she was sorry for embarrassing everyone, and mentioned that they had spent three hours soundchecking earlier in the day.

"It's OK Hope, we love you," someone screamed. "I'm on the verge of throwing a tantrum," Hope replied. Killing time, someone asked if she loved NY. Unexpectedly, Hope answered, "I absolutely fucking hate NY... but I love everyone who is here. I'm a country girl". She may have lost a few people there, and then she spoke again. It was definitely the most I've ever heard her talk on stage. "There's gonna be some heads chopped off... Sorry about this you guys," she said. Someone else yelled, "We love you Hope". Then next thing you know, faster than you can say Fiona Apple, Hope made one final frustrated gesture forward, and then stormed off the stage. Her confused band followed soon after.

Unsure if she would ever came back, we stood and waited as a sound guy tested things. Then we waited some more, and some more. After what may have been 20 minutes (and with now a few less people in the room), Kevin the bouncer came on stage to thank everyone for waiting and let us know that she was coming down, though I could have sworn he said "calming down". A minute later there she/they were, and the show began again with "Around My Smile". The song features a lot of xylophone, and a not-actually-smiling Hope banged away at it. The back of her head was to the crowd as she sang the chorus, "I've got it going, I've got it going, I've got it going..." Thankfully, she did have it going again.

Between the NY comment and the meltdown, I think she lost some fans, but I'm very forgiving, and anyway, it made it all that much more interesting. Oh, and the no-picture rule was still very much in effect, though it didn't seem to be as much of an issue as it was at Music Hall. I was told by the person at the ticket counter not to take any pictures, and the signs on the wall said the same (see above), but I didn't really see any security going nuts. Maybe that's because nobody was really breaking the rule.

After "Smile" came "Charlotte", and then "Wild Roses" which I think was when she became herself again (facing the crowd even). "Wild Roses", which first appeared on an Air France compilation in 2008, and then again on the new album, was a highlight of the night. From there they went into "Trouble". It's another great one on the new album, and the closest we got to a duet, as they really feature male back-up vocals prominently in the live version.

As I said before, I loved the visuals, and though each song's video accompaniment could get its own paragraph, for some reason the projected images during "Blue Bird" (the song after "Trouble) especially stuck with me. Hope, always channeling Velvet Underground, and looking especially waifish herself lately, sings the lyrics, "Is that the devil in your face", as a giant closeup of a Twiggy/Nico-looking model face is projected behind her. From there it was the hit "Susanne", and finally "For the Rest of Your Life", the first of two extended psychedelic jams of the evening that had me thinking of The Doors.

Encore time. It was the same exact setlist as Saturday, so I knew they would probably return for two more songs, but we kind of already got an encore, and it was almost midnight thanks to all the delays (and it was Monday night). Would they come back? On Saturday the encore break was "someone's going to the bathroom" long, and this time was no different, except this time at least half of the audience didn't wait to find out. Eventually, the band came back though, and they were with what seemed to be a suddenly happier Hope ("I like your hair do" she told someone she recognized in the crowd) (update: that may have been sarcasm. see comments).

They closed the night with "Satellite" and "Feeling of Gaze" (the second long jam of the night). The crowd was now smaller, but I think it was full of those who were most happy that Hope was back after all these years, and who knew that it might be 2016 before we hear from her (possibly with a mood swing or two) again.

Dirt Blue Gene was the opener (which I completely missed this time) and most of the backing band. The tour continues tonight (10/13) at First Unitarian Church in Philly. 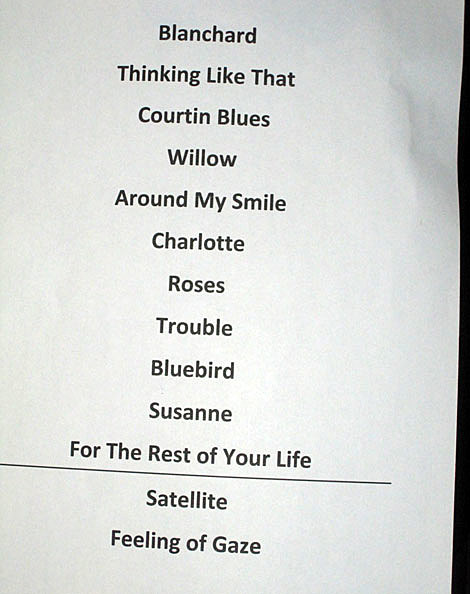