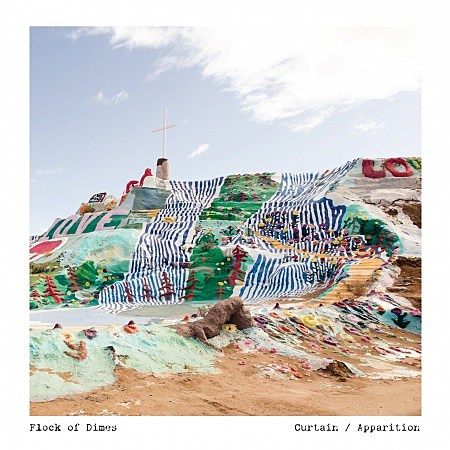 The 2012 Hopscotch independent music festival is underway in venues all across Raleigh, NC. Shows happen at night, and during the day. One such example of the latter is a show BrooklynVegan is co-presenting TODAY (9/7) at Pour House (Noon - 5:45PM, 21+, FREE). And it looks like this:

The lineup is a bit of a Baltimore/North Carolina/Wisconsin family affair, headlined by Flock of Dimes which you'll remember is the project of Jenn Wasner from Wye Oak. And like Wye Oak (who also play Hopscotch0, Flock of Dimes is now signed to North Carolina label Merge....

On September 25, Merge will release "Curtain" b/w "Apparition,"the second in a series of 7-inch singles from Flock of Dimes, the solo project of Wye Oak's Jenn Wasner. Limited to 1,000 copies, each 7-inch includes a download coupon for both tracks.

Jenn launched Flock of Dimes in 2011 as a way to explore more experimental recording and songwriting outside of the burgeoning success of Wye Oak. A tour opening for Sharon Van Etten followed, and a debut 7-inch, "Prison Bride" b/w "I Can't Tell You Why (screwed mix)," was released by Baltimore-based Friends Records in April of 2011. There are more singles planned as part of this series, but a full-length is not yet on the horizon.

"These two songs function as a pair of opposites: 'Curtain' documents the thoughtless, obsessed joy of new love, whereas 'Apparition' attempts to catch sight of the ghosts it leaves behind in the wake of its absence," says Jenn.

Produced and realized with the help of Mickey Free, "Curtain" b/w "Apparition" features a beautiful cover photograph by Matthew Yake<. blockquote>If you're in NC, stop by today. Listen to "Curtain" by Flock of Dimes, along with a reminder of Wye Oak's upcoming tour dates (which will hit Maxwell's & MHOW), below...