DOWNLOAD: Uninhabitable Mansions - Do You Have a Strategy? (MP3)
DOWNLOAD: Hooray for Earth - A Simple Plan (Zip) 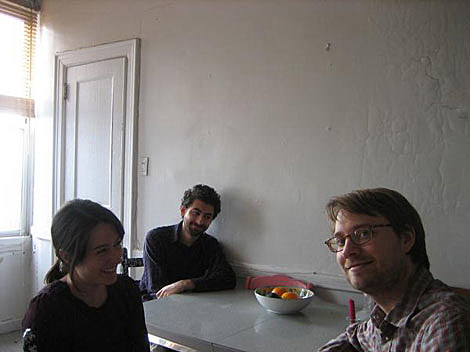 In my haste to bring you my weekend picks I realized I left out some stuff. First of all there's the opening of Littlefield, and its two free shows.

Second... Brooklyn's Hospitality, who play at Death By Audio tonight (5/22), have opened for Stereolab and Frog Eyes but remain mostly under-the-radar. (They did make L Magazine's "8 NYC Bands" runner-up list.) Singer Amber Papini's delicate, airy voice matches so perfectly with her songwriting: jazzy pop that kind of reminds me of '60s chanteuse Claudine Longet or Austin's Yellow Fever. I've yet to see them live but I'm kinda in love with the songs. While the focus tends to be on Papini, Hospitality are a trio and the most recent songs on their MySpace (recorded on a telephone, believe it or not) have a definite band feel to them. Also on the bill tonight at Death by Audio: Arizonans Stephen Steinbrink and Hell-Kite (who play at Cake Shop with The Kingsbury Manx tomorrow), and the countryish Little Gold, which all should make for one of the gentler nights at Death by Audio...ever? 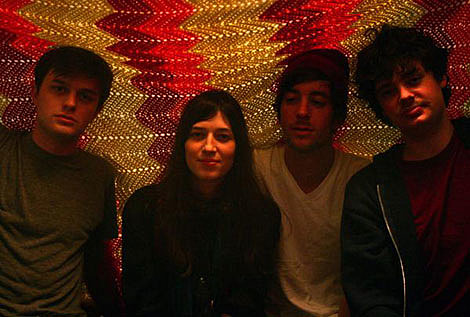 And on Memorial Day if you haven't been put into a food coma from too much BBQ, there's a great show that night at Union Pool featuring Uninhabitable Mansions, Darlings, Boogie Boarder and Ambergris. The show is a benefit for Smoke Signals, a new all-comics newspaper that Williamsburg comic/book/art store Desert Island is going to start publishing. This is likely to be Uninhabitable Mansions' only show till the fall, as Annie Hart will be busy touring with her main band, Au Revoir Simone for most of the summer. Their debut 7" is worth picking up, and you can check out it's b-side in MP3 form above. Darlings, you may remember, are one of L Magazine's "8 NYC Bands You Need To Hear" and their description of Teenage Fanclub-meets-Sloan is all I need to get me to the show. As for the other bands: Boogie Boarder are noisy low-fi and mostly instrumental; Ambergris have been dabbling in arty psych folk weirdness for a few years now. The show's $8 and all proceeds go to printing costs A worthy cause if you ask me.

And Speaking of Uninhabitable Mansions, Robbie (who is also in Clap Your Hands Say Yeah) and Chris of that band are also in Radical Dads, who play Public Assembly on Wednesday (5/27) with the interesting, somewhat genre-defying Hooray For Earth (I've seen comparisons to Joy Division, Guided by Voices, and Yeasayer... really?) and catchy synth-rockers Zambri.

Videos and flyers after the jump. Have a great Memorial Day weekend.

Hooray for Earth - "How Are You Here" 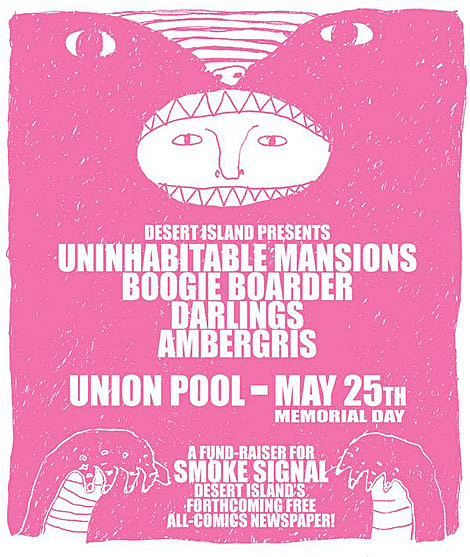 Desert Island is starting a free all-comics newspaper called SMOKE SIGNAL, which will debut in June. The paper will have a circulation of 1000 and will be available at a few choice locations in Brooklyn (and via mail-order through our website).

In an effort to raise funds for this community-based project, we are hosting a fundraising concert at Union Pool on Memorial Day, May 25th, featuring performances by Uninhabitable Mansions, Boogie Boarder, Darlings, and Ambergris. All proceeds will go towards the printing costs for the newspaper. PLEASE COME AND HELP MAKE THIS NEWSPAPER A REALITY!