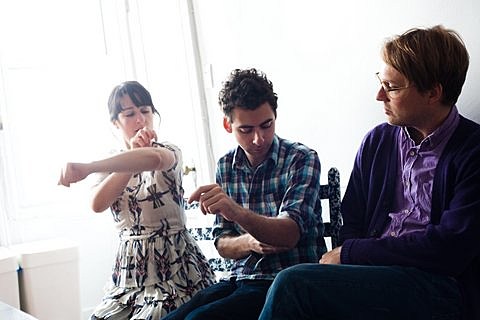 Hospitality's long-in-the-works debut album is out next week (1/31) on Merge and the band have just released a video for the horn-filled "Friends of Friends." In addition to the band playing in someone's well-equipped kitchen, the video tells the story of a relationship stretched between coasts, as played by Arrested Development's Alia Shawkat and Videogum's Gabe Delahaye (who was also recently in Real Estate's video for "Easy"). You can download the MP3 of "Friends of Friends" at the top of this post. The whole album's terrific, one of my early favorites of the year, and Spotify users can get an early listen to the whole thing here.

You can pick up the album at Hospitality's record release show at Glasslands next Friday (2/3) which also has Glass Ghost and Dustin Wong on the bill. The band are also heading out on a quick tour of both coasts and will be in Austin for SXSW. All scheduled tour dates are below.

In other Hospitality news, the band play WFMU's Seven Second Delay at UCB this Wednesday (1/25, 6PM) and have just released a Daytrotter session. Below is the "Friends of Friends" video and those upcoming tour dates.