Hospitality at Bowery Ballroom in October (more by Amanda Hatfield) 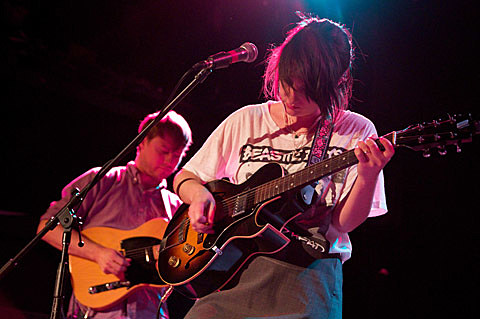 Hospitality recently finished up a bunch of shows in NYC during and after CMJ. They'll take a short break until they release their debut LP on Merge on January 31. The band will celebrate the release of the album at Glasslands on February 3 with fellow Brooklynites Glass Ghost. Tickets are on sale now.

Hospitality's "Betty Wang" appears on the Merge Records Winter Sampler, alongside tracks by The Mountain Goats, Archers of Loaf, Lambchop, Imperial Teen, Wild Flag, Eleanor Friedberger, and others. You can download the entire sampler above. If you hear something you like, check out the Merge Store where they're running a holiday sale.

Meanwhile, you can catch Glass Ghost even sooner at Cameo Gallery on December 8 with Little Horns.

The Merge-signed Ladybug Transistor plays Mercury Lounge with Citay and Ill Fits one day before that.