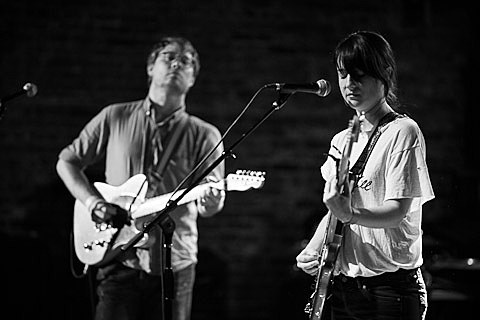 Though copies have surfaced on the road in the days prior, Hospitality released a new 7" via Merge on 10/30 featuring a pair of new jams in "Monkey" (streamable below) and "The Drift". Though the band was forced to cancel an outing at Bowery Ballroom on 11/2 due to some jerk named Sandy, the band is ready to go with another date in its stead: January 10th at Bowery Ballroom with TEEN. TIckets are still available for the show, or you can use the ticket you already had for the cancelled show, or roll the dice and try to win a pair along with said 7". Details on how are below.

Hospitality is scheduled to lay low until that Bowery date, but you can still catch TEEN in Brooklyn at Knitting Factory on 12/15 with Guards (tickets). Until then, dig on some streams while entering the contest below....

======================
For a chance at winning a pair of tickets to see Hospitality/Teen at Bowery Ballroom on 1/9/13: either tweet something that includes both @BrooklynVegan AND "Hospitality" in the tweet, or send an email to BVCONTESTS@HOTMAIL.COM with the subject line "Hospitality". Include your first and last name in the email and we'll pick winners at random and contact them with more details. If you enter by email, it will not be shared with anyone else. Good luck!
======================