Happy Groundhog Day folks. As you may have heard, Punxsutawney Phil saw his shadow so we're getting six more weeks of winter. If that means the kind of winter we've had so far, I'm okay with that. I'm much more likely to head out and go see shows when not faced with the dreaded wintry mix. And there's lots of good shows this weekend, so let's get out there.

First up, the Hospitality record release party at Glasslands this Friday (2/3) (tickets still available). Their album came out this week on Merge, and I think makes a great case for not rushing things. Hospitality started playing about three years ago and released a CDR EP in the spring of 2009 that got them some notice. Most bands would've had an album out by the end of the year, but Hospitality took their time, honed their craft and became a really great live band. And the album is terrific, not a bad song in the bunch; winsome but there's some muscle in there too. You can stream the whole shebang at Merge's website or with Spotify.

The record release party also Glass Ghost and Dustin Wong on the bill. The band are also heading out on a quick tour of both coasts and will be in Austin for SXSW. All scheduled tour dates are below.

On the complete opposite end of the spectrum are The Darkness who are back for their first US tour in six years, playing Irving Plaza on Saturday (2/4, sold out) and Monday (2/6, still available). As stated before, I'm a huge fan of the Darkness' first album, 2003's near-perfect Permission to Land, which I picked as one of the best of the '00s. As a pop album. Justin Hawkins knows his way around a giant hook. After the overblown excesses of One Way Ticket to Hell (And Back) and Justin Hawkins' ill-advised Sunset Strip spandex group Hot Leg, the band seem to be back on track with new single "Nothing's Gonna Stop Us" which is a little more in the "Growing on Me" vein.

The Darkness' show at Bowery Ballroom back in 2003 was one of the most fun shows I've been to in the last ten years, and from YouTube footage of recent shows it looks like they've still got it. They are a kick-ass live band -- it takes skill to play "I Believe in a Thing Called Love's" solo whilst riding on your roadie's shoulders through the audience. (I hope they're still doing that.) Tickets are still available for Monday's show.

Hospitality aren't the only ones with a record release party this week. The Big Sleep released The Nature Experiments this week, their first album in four years and their record release show is tonight (2/2) at Knitting Factory. It might be their most melodic record to date, with more songs that have caught my ear on first listen than I remember them doing before. You can download two of the album's best tracks at the top of this post and the listen to the entire album at Spotify. The Big Sleep are touring as well, and all dates are at the bottom of this post.

Moonmen on the Moon, Man

Still more record release party fun: Tomorrow night (2/3) at Cake Shop is a dual record release party for Moonmen on the Moon, Man and Glass Anchors who both have record coming out on the venue's subsidary Cape Shok label which finally seems to be in gear after a lot of promise but inactivity. MMotMM, which might feature members who work or even own Cake Shop, rock in an late-'80s/early-90s college radio kind of way. Their endearingly sloppy pop -- with a little punk and twang -- woulda been right at home on, say, Frontier Records, nestled in amongst Flop and Thin White Rope and Redd Kross. You can download a track from the EP at the top of this post.

Glass Anchors is the musical project of songwriter Annie Sicherman who I admit to not knowing much about but her Cape Shok EP is lovely, dusty folk pop. Says the press release:

Honing her songs in various bands over various years, soaring songstress Annie Sicherman brings us GLASS ANCHORS. The songs on her fledgling EP are plaintive, reflective, honest, and good. GLASS ANCHORS sounds best tearing up road (preferably dirt), the one to oblivion - right after you ended the longest relationship you ever had, the one you thought would last, the one with the proposal. That road can be in your head, but certainly GLASS ANCHORS has the ability to take you there every time... with Glass Anchors, we have the real Annie 3000%, no matter what road you're on.

You can stream Glass Anchors' EP at the bottom of this post. The Cake Shop show also features Bright Lights, Overlord and Fergus & Geronimo.

That's the big stuff this week. A few more picks, day-by-day, are below of things not already covered here.

LA's Classixx play the Popshop party at Santos with Workout and The French Horn Rebellion. You may know Classix from their remixes, like the excelent one they did for Phoenix's "Lisztomania." The group's new single is out this summer on a new label that's a joint venture from the Kitsune Maison folks and, I'm not kidding, the Cobrasnake.

Spacecamp, Mon Khmer, Romans and Skaters are at Bowery Electric. Spacecamp's new EP is pretty good, especially if you like a little Police in your pop rocks.

The Death Set, who I haven't seen play since maybe SXSW 2008, are at the Delancey. Always fun live. 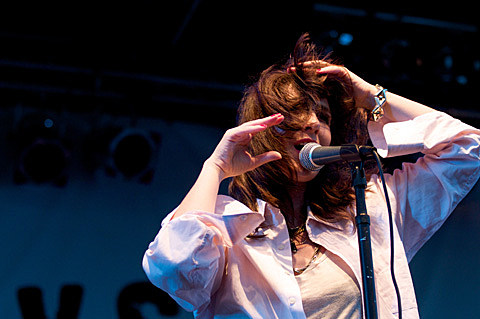 As mentioned, for your dancing on a Friday night needs, Class Actress, Pictureplane, and Beige are at 285 Kent. 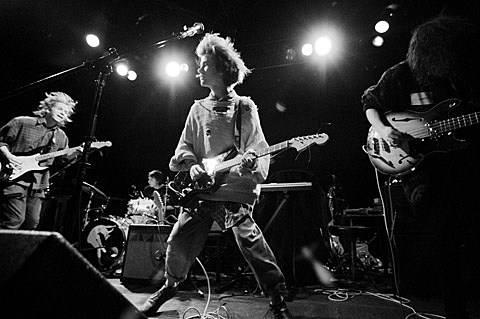 Tycho play Music Hall of Williamsburg. They were good at the same venue back in October, with good live band and an amazing light/projection show. Also with Oneohtrix Point Never, and Beacon.

And I'm just going to assume on Sunday you're going to a Superbowl party, because even if you don't care about football everyone love nachos.

Tour dates, flyers, videos and music streams are below.

Hospitality - "Friends Of Friends" from stereogum on Vimeo.

The Darkness - Nothing's Gonna Stop Us