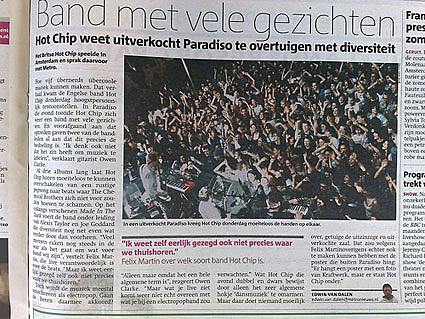 Exciting NYC Hot Chip news. Their April 12th show at the large Terminal 5 is sold out, so they added one four days earlier at the significantly more intimate Music Hall of Williamsubrg in Brooklyn. $35 (ouch) tickets for the April 8th show go on sale March 24th at noon. There's also a Hot Chip show scheduled for Sunday April 13th at R Bar in Manhattan with The Glass, but Hot Chip will only be DJing at that one (thx Hiro).

Hot Chip also have a new show scheduled at the Mayan Theatre in LA right after they play Coachella (with Prince). Maybe that LA show replaces the show they were supposed to play at the El Ray in February, or maybe it's in addition to a make-up show because the El Rey one is actually still listed on Ticketmaster too. All tour dates below....