Hot Chip at Prospect Park in 2012 (more by Toby Tenenbaum) 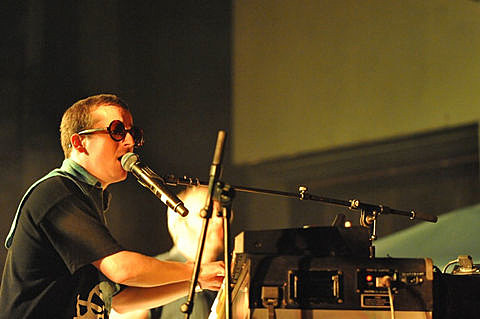 Astralwerks Records was founded in NYC in 1993 as a primarily electronic arm of Caronline Records. When they hit it big in the late '90s with Chemical Brothers, Air and Fatboy Slim band, Astralwerks became one of the biggest indie labels in the country. They've since been picked up by Universal Music Group and have expanded into other genres but they do maintain a focus on the electronic. To celebrate their 20th anniversary this year, Astralwerks will release a limited edition box set, Astralwerks: Music in 20/20, on Record Store Day (4/20). The compilation features previously unreleased or rare tracks from Hot Chip, Air, Diamond Rings, Kraftwerk, Kings of Convenience, Doves and others plus previously released tracks by The Chemical Brothers, The Beta Band, Fatboy Slim, Cassius, Basement Jaxx, Royksopp, a Four Tet remix of Sia and more. Check out the full tracklist and trailer video for the compilation below.

Hot Chip are on the festival circuit this spring/summer -- including Coachella, Primavera Sound, Osheaga, Lollapalooza, and others -- and as mentioned, they're stopping in NYC for a show at Roseland Ballroom on Tuesday (4/9) before Coachella. Tuesday's show is with The Crystal Ark (DJ set) and Tanlines. Tickets for that are still available. All dates are listed below.

Meanwhile, TONIGHT (4/8) at Le Poisson Rouge, Hot Chip side project The 2 Bears (aka Joe Goddard and Raf Rundell), who are also playing and touring around Coachella, play a a show with Ladies Night. Tickets for tonight's show are still available. All dates are listed below.

All Tanlines, Hot Chip, and 2 Bears dates are listed, along with the Astralwerks album tracklist and trailer, below...

1: Future Sound of London - The Far Out Son Of Lung And The Ramblings Of A Madman (Original 12" Version)

7: Kings of Convenience - Winning A Battle, Losing The War (J-Walk Remix) [Previously unreleased in the US]*

8: Basement Jaxx - Where's Your Head At

12: The Kooks - Put Your Back to My Face [Previously unreleased in the US]*

15: Air - Indian Summer [Previously unreleased in the US]*

16: Kraftwerk - Die Roboter [German language version of "The Robots." Previously unreleased in the US]*