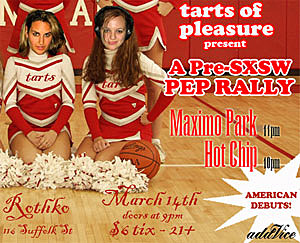 The Tarts of Pleasure, aka Ultragrrrl and Karen Plus One are bringing two UK bands to Rothko in NYC on March 14th. Maximo Park and Hot Chip will be making their U.S. debut at the "Pre-SXSW Pep Rally." It won't be much of a rally for me since I'll be stuck in NYC working during SWSW, but the party looks like it's worth checking out.

Hot Chip's influences range from the Beach Boys to Ween to Devo to Madlib. So says the BBC, where you can watch exclusive in-session videos of five of their songs.

NME says "Hot Chip are an "R&Bedroom electro team" from London who make beats with biscuit tins and sing about blasting Yo La Tengo tunes around the streets of Putney." (I say that Yo La Tengo song sounds like The Unicorns)

I also say, Yo La Tengo are playing Tonic.

(Maximo Park are...) "Tom, Lucas, Archis, Dunc and Paul, the art-poppers who recently signed to Warp want to keep cool, creative and independent with their own blend of experimental pop and driving powerchords. Finding inspiration for their songs about objects of desire by looking at the dull topics average bands use as excuses for songs (Their words). Their edgy and addictive style sounds like a cross between Franz Ferdinand and The Strokes. " That's from XFM, where you'll find some streaming in-session audio to listen to.

Listen to more Maximo Park at their official website.

According to Sarah, her and Karen will be wearing cheerleading outfits at the show (see above image for a preview).

Karen says, be there foolios!