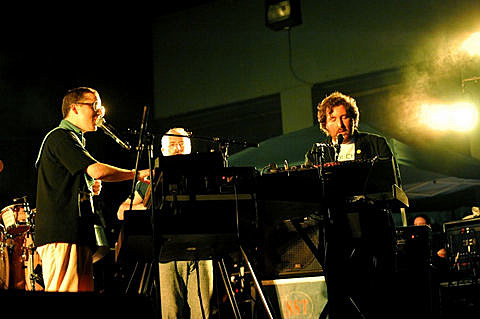 Hot Chip, who finished up their tour last night (7/22) in MD with Sleigh Bells, played Terminal 5 on Friday night (7/20), their second NYC show of the week following a slightly-damp show at Prospect Park two days before. And while the crowd was tamer than I've seen at previous Hot Chip shows (I think this was my 10th time seeing them?) it was certainly not the fault of the band who have honed the electronic band live experience to a science. With a blinding stroboscoopic light show and two auxiliary members beefing up their sound, they seemed not just ready for the floor but ready for arenas.

One of my favorite things about seeing Hot Chip live is that they are never afraid to mess with their best-loved tracks. "Over and Over" and "And I was a Boy from School" both got massively reworked, the latter now driven by electric piano that gave the song an early-'90s balaeric kick. I could of used a few more oldies, as we got nothing from Coming on Strong and just those two songs from The Warning, plus two each from Made in the Dark ("Hold On," and "Ready for the Floor" which was clearly the crowd's favorite) and three from One Life Stand ("I Feel Better," "Hand Me Down Your Love" and the title track).

We got most of the new album In Our Heads (though not my favorite song "These Chains"), which the crowd didn't seem to know very well. For the encore, Alexis Taylor invited out Lizzie from Gang Gang Dance (who opened for Hot Chip at Prospect Park) to sing on ballad "I Have Always Been Your Love." The show finished with "Let Me Be Him" which veers into M83 territory, what with the "whoah oh oh" chorus and a bombastic finish that was especially arena-ready.

Wed don't have pictures from Terminal 5 but you can look at shots from from Prospect Park and Pitchfork too. Watch their appearance last week on Fallon if you missed it, and catch Hot Chip this December on on one of the Coachella Cruises. Chromatics opened the Terminal 5 show and also played Sunday (7/22) at Music Hall of Williamsburg which you can see pics of here.

Setlist for Friday's Terminal 5 show is below.

Hot Chip - Terminal 5, 7/20/2012 setlist:
Motion Sickness
And I Was A Boy From School
Don't Deny Your Heart
One Life Stand
Night and Day
Flutes
Over and Over
Hand Me Down Your Love
Look At Where We Are
How Do You Do?
I Feel Better

Encore:
Always Been Your Love
Ready For The Floor / Everywhere
Hold On
Let Me Be Him
---