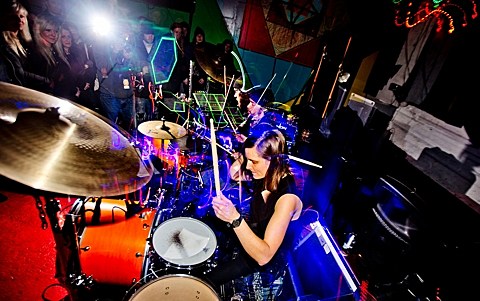 Portland's Hot Victory throws a kitchen sink of drums, drum pads, synths, tape loops, samples--you name it--together in pretty fascinating ways. It's the work of just one woman and one man, but it could just as easily be the output of an army of talented DIYers raiding the local music store. New single "Labyrinthos," is as tribal as it is cosmic and experimental, and it pushes forward with a vibrant energy on the back of lively drumming loaded with "Aha!" tricks and circular patterns that give it a hypnotic quality. The drumming may steal the show, but a hefty dose of samples and synths help give the song a memorably sinister quality. It's not too far off from the experimental yet droning material of Pinkish Black.

"Labyrinthos" is off of Hot Victory's forthcoming self-titled LP, the band's fourth, out on Eolian Empire on April 22--head over there to preorder a copy, and listen to the premiere of "Labyrinthos" down below.

Hot Victory hits the road in late April, and joins up with Floor for a string of dates, including the NYC show at Saint Vitus on May 5. Tickets are on sale.

We've been going on about Floor quite a bit lately--the Florida band releases its forthcoming reunion album on April 29, and they've streamed four songs off of it already.

Song stream and the list of tour dates below...