Kendrick Lamar at House of Blues (photo by @s_adegoke, via Facebook) 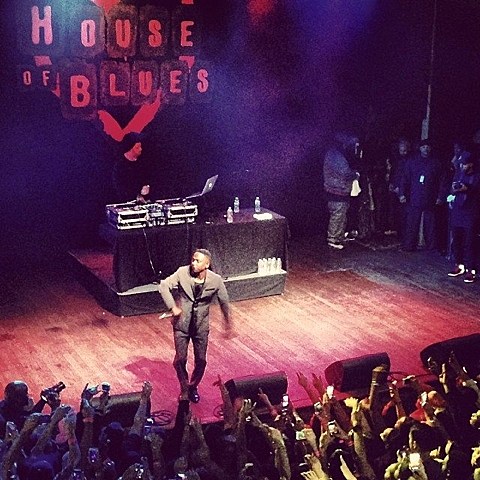 LAist reports that a few Sunset Strip locations will have to close this year so new hotels can be built, including the original Hustler store and the House of Blues. The music venue opened in 1994 and an official closing date has been set for August 7. A demolition date is still TBA.

As of now, the final schedule includes Soul Asylum & Meat Puppets, Freddie Gibbs, Anthrax, Stiff Little Fingers, and more. There are still a handful of open spots in the venue's last weeks, so perhaps some final shows are planned. If so, we know it won't be a metal band, as Blabbermouth points out that Anthrax show will be the venue's last metal show.

Regarding the venue, Anthrax bassist Frank Bello said, "Every show we've done at the Sunset House of Blues has been a party. Everyone who we're friends with who's not on tour shows up, either to jam or drink or just hang out. And I'll really miss that. Sunset Boulevard has lost its last great place to play."

Watch a video of Social Distortion playing the House of Blues Sunset Strip with Billy Gibbons of ZZ Top, below...