Touche Amore at House of Vans (more by BBG) 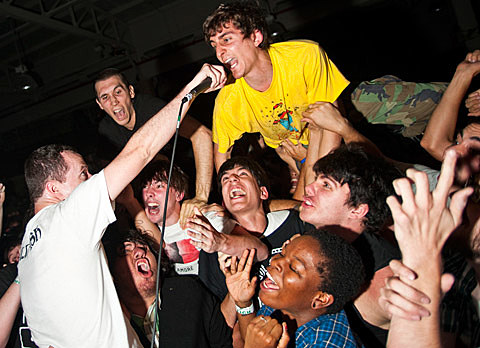 If you were curious about whether this summer would see a return of the House of Vans, the home of 2011's shows with Man Man, Superchunk, Fucked Up, Tokyo Police Club and more, wonder no more.

Vans and FYF are excited to announce the return of the Vans House Parties to Brooklyn this summer. The first installment of the free concert series will kick off live from the House of Vans (25 Franklin Street) on Wednesday, June 20th with performances by The Rapture and Tanlines, and will feature a Dave P (Making Time/Fixed NYC) DJ Set. The show will be followed by a second Vans House Party on July 12th, with performances by H20, 7 Seconds, and more. There will be four additional Vans House Parties throughout the summer on July 26th, August 2nd, August 16th, and August 29th.

Still no word on who will play any of the other parties, but we'll keep you informed.

The Rapture's last NYC stint included a pair of shows at Bowery Ballroom (pictures) and Music Hall of Williamsburg (pictures).